You all know what this is, right? 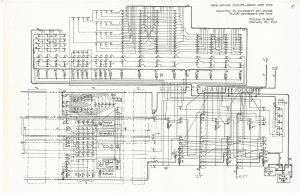 Of course, it’s a New York City subway Fare Decoder Circuit,– Heavy Duty Type, circa 1952. Don’t feel bad if you can’t make much sense of it — we can’t either.

So what’s the point?

The diagram comes from a 65-year-old report of the Mayor’s Committee on Management Survey, that mouthful of a municipal reform effort that consumed New York through the early 1950’s and was instrumental in reshaping the city for the modern era.  You’ll remember, no doubt, that the executive director was Luther Gulick. Of course. We’ve written about the MCOMS before. It began under Mayor William O’Dwyer (who resigned in a police corruption scandal), continued under Mayor Vincent Impellitteri, and concluded under Mayor Robert Wagner.

Gotham Gridlock — Then and Now

The management survey examined every aspect of the city’s operations, including its vital transit lifelines. Then (as now) the subway and bus system was in crisis. Subways in particular were jammed, (or let’s say rapid transit because the Third Avenue El was running until 1955 in Manhattan, the elevated lines on Second, Sixth and Ninth Avenues having previously been torn down). One plan was to extend the length of trains from the usual seven cars to as many as fourteen.  (Most now run eight to eleven cars). That would have required a lengthening of some stations. Or a complicated system of stopping only some cars (front or back) at certain stations. Planners considered skip-stop service, by-passing certain emptier stations at rush hour. Some of the innovations were adopted over the years.

But what caught our eye (and why we were moved to write this) was a little notation in the decoder circuit diagram — did you catch it?

But you got change for, say, a quarter. How cool was that! Bus drivers made change until 1969, when you had to start dropping in the exact fare — 20 cents.

How quaint. How civilized.

Perhaps the end of the era came in 1953 with the arrival of the subway token — and a disgusting practice. Scam artists would stuff the turnstile slots with paper and later suck out the trapped token. To stymie them, cops would sometimes sprinkle the slots with chili powder.

That all ended with the arrival of the MetroCard in 2003. But ahh for the days of the change-dispensers.

2 thoughts on “The Times They Are (Not) A-Changin’”