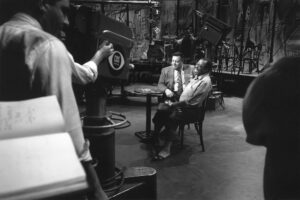 Purchased with funding from the State of New York. Percent for Art Program, 2001

Milton J. Hinton, musician and photographer carried a camera in his pocket to document the joys and rigors of the traveling life. Being a bass player himself, afforded him the opportunity to be in places with fellow musicians that professional photographers may not have had access to. Hinton’s work offered an insider’s view of the jazz scene. In this gelatin silver print photograph, Hinton captures Jackie Gleason and Louis Armstrong sitting at a little round table at a television studio in the year 1959. This photograph was taken on the set of the “Timex All-Star Jazz Show” during a rehearsal. The episode was entitled, “ The Golden Age of Jazz” and was hosted by Jackie Gleason. Hinton had previously performed with Louis Armstrong and he considered Gleason to be a friend after he told his manager to hire him as a bassist. As one of the most highly respected musicians in jazz, Hinton was able to capture candid moments in the studio and on the road that would likely elude an outsider.