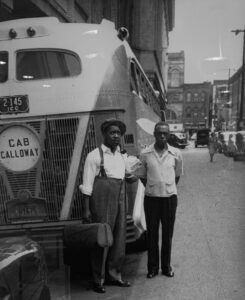 Born the grandson of a slave, Milton J. Hinton spent most of his childhood in Chicago. Hinton’s family was part of the mass exodus of nearly 50,000 Black Southerners moving to Chicago in search of work in the city’s factories. Hinton opted for a career in music instead, trying several instruments before choosing the string bass.

While playing for the Cab Calloway Orchestra, Hinton met Jonah Jones, a trumpeter known for his unique swing style. In this photograph, it appears that the band has arrived at its next tour stop; Jones with trumpet case in tow. We see two men who appear exhausted from traveling through the Jim Crow South. At the time, the majority of theaters and clubs were segregated, as were restaurants and motels.

Hinton took more than 30,000 photographs from 1935 to 1999, which became a document of 20th century jazz history. His work provides an insider’s account of the scene, showing musicians in recording studios and traveling on the road. He was featured in the New York Times and numerous documentary films. Hinton taught at Baruch in the 1970s and established a scholarship fund in his name for aspiring student bassists.

–Writing and audio by Patricia Stachowicz, graduate student in the Arts Administration program at Baruch College