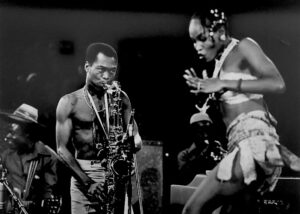 Purchased with funding from the State of New York Percent for Art Program, 2004

The Berlin Jazztage Festival (Berlin Jazz Days) began in West Berlin in 1964 as a means to “document, support, and validate trends in jazz, and to mirror the diversity of creative musical activity.” Following in the years after the Second World War, when Germany was still divided between East and West, this festival served as a means of uniting people through jazz music.

In 1978, Uwe Rau, a photographer from Hamburg, captured Fela Kuti’s performance. Rau was a frequent attendee of the festival, having photographed other prominent musicians in years prior, including Jimi Hendrix.

Fela Anikulapo Kuti, known simply as Fela, was a Nigerian musician and social activist who advocated for Nigerian independence and autonomy. He coined the term Afrobeat, a genre blending traditional Yoruba music with jazz, salsa, funk, and calypso, resonating with audiences around the world. Born under British occupation, Kuti’s lyrics were drawn from his personal experience as well as the Black Power movement in the United States. Photographed above, we see a performance of Cross Examination, a song that surveys the lasting effects of colonization.

-Writing and audio by Patricia Stachowicz, graduate student in the Arts Administration program at Baruch College