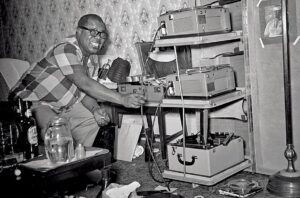 Purchased with funding from the State of New York, Percent for Art Program, 2001

In this photograph, Milton Hinton captures Louis Armstrong sitting in his hotel room in Seattle, Washington. Hinton captures a behind the scenes look of musician life. Armstrong is pictured on a couch on the left side of the photograph. His facial expression is one of excitement and joy. To the right of the photograph is a music trunk. Louis Armstrong was a bandleader, soloist, actor, comedian and singer known for songs like, “Hello Dolly, “What a Wonderful World,” and ”Star Dust”. His career spanned five decades, from the 1920’s to the 1960’s. Being the leading trumpeter and one of the most iconic artists in jazz history, Louis Armstrong influenced jazz horn players that came after him. The rhythmic suppleness and swing of this vocal style had a huge impact on singers from Bing Crosby to Billie Holiday. Armstrong was also a Civil Rights pioneer, breaking down many racial barriers. In the 1950s, Armstrong was criticized for his onstage persona and called an “Uncle Tom” but he silenced critics by speaking out against the government’s handling of the “Little Rock Nine” high school integration crisis in 1957. Louis Armstrong was one of the first popular African-American performers to “cross over”, which meant his music transcended his skin color in a racially divided America.