I believe that our society is basking in a women power moment that doesn’t exist. It’s a mirage of equality that we’ve been talked into believing is the real thing. But in reality women’s right in this country aren’t quite accomplished.

Because despite the indisputable gains over the years, women are still being raped, trafficked, violated and discriminated against, not just in the rest of the world, but here in the United States. And even though feminists continue to fight gender injustices, most people seem to think that outside of a few battles, the work of the women’s movement is done.

It’s time to stop fooling ourselves.women in this country aren’t doing nearly as well as we’d like to think, and we should all be aware of that. On average, women earn significantly less than men, according to goverment data. Fewer women stay in the work force long enough to attain top-earning positions. Many who do stay say that social pressures, and their employers, make it tough for them to advance.

This is problem for many developed nations. Despite women having more opportunities, there’s still social pressure for women to be wives and mothers. O

Posted in Uncategorized | Comments Off on Gender Inequality http://www.youtube.com/watch?v=pQ8XwFMG5c8

Sexism in the Media

During class last week, we discussed the different way men and women can be discriminated in various situations. In the video posted above the the creator addresses the idea of sexism in the media. He gives us various examples in the media where women who are suppose to be everyday women are depicted as thin and beautiful. He gives the example of the show Friends who is the story of a group of friends and how they interact in their everyday home life. All the women in the show are thin and beautiful, and all the men are average looking men at an average weight. He also gives the example of The Simpson’s which is an adult cartoon show geared to depict an average family, husband, wife, daughter and son. The wife is displayed as very thin, with a tiny waist. The father on the other hand is depicted with a beer belly.

These different examples in the media are one of many. Everyday, when looking at media examples we are bombarded with situations where the women must be thin to be beautiful. This gives children the idea that they should potray these figures because these are the one’s they are seeing everyday. The media feeds us what they want us to intake. The media should be more careful about what they depict. It is not fair for the media to tell us that we should look this way because this is the average American women. They should encourage individuality and that all shapes are perfectly acceptable as long as your healthy and comfortable with yourself.

Many Americans have the thought in their head that Muslims are terrorists, unfair and oppressive to their wives, are not modern or universal, and are also violent.  These characteristics have been labeled upon every Muslim individual. Unless you are Muslim, you wont see how difficult it can be. Every time a Muslim goes to the airport, he or she will be extensively searched, abused and harassed, just because of his or her religion. The labeling theory had caused many difficulties within the Muslim communities, during the terrorist attacks of September 11, 2001.  Heartbroken Americans along with the media caused confusion and many hard times for Muslims. Women, in the middle of the streets in America, during this time were harassed and abused just because they wore a headscarf. Just because one group of Muslim extremists creates destruction to a number of different communities, doesn’t mean that every Muslim in the world is the same way. A Christian psychopath walks in to a movie theatre, shooting up the place, and it’s considered massive homicides. Let alone, if that same man grew his beard and labeled himself as a Muslim, the media would tear up the world causing an influx of frustration within the American society, publishing it as terrorism. A radical mind is the same throughout; religious beliefs are left out of it. As it is shown in the Quran, Islam is peace in different forms. In addition, it was against Islam to backbite, let alone terrorize people. In the most recent news story, a man went into a Sikh temple thinking that this was a mosque and shot and killed many people. A common misconception is that in a Muslim culture men often wear turbans, but in fact this is actually a part of the Sikh religion and also some parts of Afghanistan, which are Muslim.

Our final topic of discussion this term was sex and gender inequality; a topic I feel very strongly about. Although rape is one of the more frequent acts of violence, it is reported to the police the least. And many men and women believe that women bring rape upon themselves depending on the clothes they are wearing. Personally, it saddens and disgusts me to think that a women has to constantly be afraid or have a thought about what type of message their outfit may or may not send out to men. It doesn’t matter how much skin a women is showing, if a man asks to sleep with her and she says no, the answer is no. There should never be the excuse of, but she was asking for it because she was showing off her body. What a women is wearing doesn’t send any mixed signals to men or give any man the right to touch a women inappropriately without consent. If a women is comfortable with her body, she should be able to wear whatever she feels confident in without thinking that someone may act violently towards her. I know many women who dress the way they do for themselves and not to give off any sort of impression towards men. In NYC, it’s legal for individuals, men and women, to go topless. A women’s body on display doesn’t mean she’s looking for attention. It’s sickening that in instances of rape, women have been blamed based on what they’re wearing and that they should be the ones to change their actions.

Last summer, in NYC, there was a protest called Slut Walk, where people were bringing light to the issue of individuals placing blame on women for getting raped. In the video, an individual states that even a police officer in Brooklyn stopped a couple of girls to suggest that they do not wear skirts because there is a rapist in the neighborhood. A woman shouldn’t have to change anything. Instead, there should be deeper investigations these horrible situations.

Posted in Uncategorized | Comments Off on Bureaucracy

Are women safe anywhere. School should train counselors about the dating abuse matter. Parents in our society also should take active part to eliminate these issues. There should be measures maintained in schools for dating. Girls should be allowed to report abuse to their parents, school staff or counselors. This will help to solve the issue. This is same as people do not report rape issues. There should be effective place to report these types violence and dating abuse. Society should develop safety measures regarding school dating and violence. Parents should control their children regarding dating such as control on internet surfing, control on watching TV. They should guide their children about the harmful effects of dating violence. Schools should have routine counseling periods to aware kids about these topics. This topic also raises the issue of diseases and related abuse.

This is new racism for voting system. Latino votes are compared to black votes. The issue there must be proper measures to count votes. The voting should not be based on race, culture, ethnicity. We should only pure and proper vote voting method.

This shows how we can conflict in US Education System. Grade levels patterned to work together.  The dependency nature of all levels will increase the problem. If one grade level did not perform properly it will continue on to the other grade level. Student and teacher meetings should be arranged regularly to solve the students issues. The other system provides where age is the main key to level the education system. Different age group students to the college. The old age group students should go the special age group college. This is will maintain the system education level.

The education system of US is still structured than other systems around the world. US education is expensive as compared to other countries.

Women Discrimination in the Workplace

During the last week of Sociology class the topic was mainly focus on gender discrimination in the work place.  I’ve always heard of such discrimination but I never recalled speaking about it such in depth within the class room environment.  It amazes me how in the 21st century females have yet to gain the fair treatment they are entitled to by law.  In many corporations it is a fact that women get paid less than men.  Sure women have the right to sue the workplace but then the workplace may have strict regulations indicating not to enclose one’s own salary therefore does the group really being discriminated really have a right to sue?

The video I posted is a prime example of gender discrimination.  A woman who was a devoted employee in a corporation was later treated unfairly after she came back from maternal leave.  I find that outrageous and unacceptable for the employers to behave in such a manner and discriminate due to a circumstance that by law, should be acceptable within the workplace.  The woman employee in the video along with ten other female victims sued the company.  The verdict was on their side and the court rewarded the eleven victims with 250 million dollars.  Now I don’t know if I agree with that reward considering the fact that those employees were no where near making such a fortune regardless of being treated equally or not but nonetheless they deserved to be compensated justly.  There were further incidents within the company that included employers sexually harassing the female employees and making them watch pornography  during and after work hours and so forth.  Discriminations such as this must stop within the work force and stricter beucratic measures have to be passed to provide gender equality in corporate America. 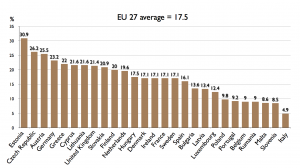 Female are half of our society. Without the development of women, a society will find it hard to thrive. However, still lot societies are undervaluing the contribution of women.

I came from Bangladesh, a country in South Asia. There are a lot of cases of discrimination in that part. In different parts of the world, male-dominated society is very prevalent. Funny thing is, even in 1st world countries like US and Europe has some sort of discrimination against women. Even though there are lot of rights for women in US, the wage gap is still very much existent. In my first picture, I have presented a graph which shows the wage difference between men and women in different countries in EU.  The gap ranges from 30% to 4.9 %. Even in different countries in Europe, the gap fluctuates a lot. Imagine what that gap might be in countries where women have fewer rights and less working opportunities.

I wanted to say that women need more empowerment and we can achieve that by providing good amount rights and work opportunities to them. In that way, a country could be benefited as well as those women whose role was previously confined inside four walls.