Click Here to listen to a radio interview with the author of the book No Simple Highway: A Cultural History of the Grateful Dead that explores the utopian ideals that led to the success of The Grateful Dead.

Click here to check out this NYTimes article about a British TV Show about technology gone wrong.

A song about the development and dropping of the atomic bomb.  The ultimate power: Did it bring utopia or dystopia? 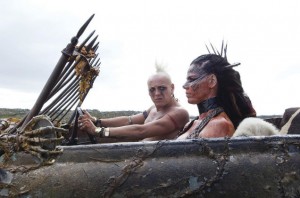 Cool rules for dystopias that I slightly disagree with.

“Man is the symbol using animal, inventor of the negative, separated from his natural condition by instruments of his own making, goaded by the spirit of hierarchy, and rotten with perfection.”

“Throughout the ages the Utopias reflect the anxieties and discontents amidst which they are produced. They are, so to speak, shadows of light thrown by darkness.”

“The Rainbow Connection,” by Kermit the Frog. This might strike some as an odd pick, being that it captures more of what Frederick Jameson calls “the utopian impulse” than any particular utopia, and also because it is sung by a Muppet.   “Rainbow Connection” offers no blueprint for a better world, no program of reform, only the hope that there is something better to be had, somehow. But, isn’t the vague, never-specified “better world” at the other end of the rainbow a true vision of the “good place/no place” signified by the term utopia? Isn’t the debate staged in the song (between those who think that rainbow’s end is an “illusion” and “the lovers, the dreamers, and me”) actually the perennial debate about whether one should work for a better world, or just work to maximize one’s own gains in this world. So, for all those who are not quite satisfied with the “way that things are,” who aspire to be more than the hedonistic maximizers of economic theory, this is for you. There is no better version of the song, for my money, than this Muppet Show duet between Kermit and Blondie singer Deborah Harry.

“Zion Train” by Bob Marley. Long before Thomas more wrote Utopia, Zion was a Promised Land that played an important role in many utopian aspirations. Here Bob Marley taps into this strain of religious utopian imagining.

I.G.Y. by Donald Fagan. The initials of the title stand for “International Geophysical Year,” an event of international scientific cooperation between from 1957 to 1958. The song presents a retro-future vision of a technological utopia, the closest thing that I have found in popular music to an earnest song about a “traditional” utopia. But it must be said that technology solves all the problems here. Human unhappiness disappears in the plenty that is brought by science, without any thought given to political or social considerations. Fagan’s retro-future world is less like what Wells calls a “utopia of organization” (in which human problems are solved by means of superior social and political organization) and more like the Land of Cockaygne, the Middle English version of Big Rock Candy Mountain that J.C. Davis has taken as the exemplar of one his five types of utopia, one of unlimited abundance fulfilling unlimited desire.

“Nothing but Flowers,” by The Talking Heads. OK, this is not a “straight” utopian song without irony (and who knows what the heck David Byrne is talking about when he says he was that as an angry young man he would pretend he was a billboard who fell in love with a highway). In this song, the suburban commercial sprawl has, for reasons unknown, been left to revert to its natural state. The narrator, however, misses the old life (“if this is paradise, I wish I had a lawnmower”). The song captures the tension between the Rousseauian primitivist that haunts so many of us (who tells us that we would be better off with a little less “civilization”) and the hopeless consumer, who will forever crave “cherry pies, candy bars and chocolate chip cookies.” I sometimes think that it would be cool if all these annoying cars, shopping malls, parking lots, discount stores and 7-11’s just ceased, and the flowers covered over everything. But could I really do without them? Probably not. Ironically, it is the impulse to “get away from it all” that drives the sprawl in the first place: so many of us want both to live in the country and near an Outback Steakhouse that we keep expanding the development we are trying to escape. The whole situation is a bit of a catch 22. How long can we keep running away from ourselves?

Alternate Takes: David Byrne’s song can be viewed as a reaction to less ironic calls to return to a “garden of Eden” such as “Woodstock” (“we’ve got to get ourselves back to the garden”) and “They’ve Paved Paradise and Put Up a Parking Lot” (the title says it all). The song was written by Joni Michelle. Here is the Counting Crows version:

“Imagine” by John Lennon. I’m sure there are those who wish that this was #1, but Kermit and flowers come first in my book. It is my firm belief that what Lennon is talking about here is an anarchist utopia, in spite of the recent splicing of the song into a montage of scenes from George Lucas’ THX-1138 which strongly suggests that Lennon’s vision is totalitarian. Lennon? Totalitarian? Come on…let me quote: “If you go carrying pictures of Chairman Mao/ You ain’t going to make it with anyone anyhow” (“Revolution”). Think Emma Goldman, not Joseph Stalin. In this song, Lennon simply suggests that government, organized religion and property are the sources of all human misery, and asks us to imagine a world without them. Lennon displays more faith in human nature than I have, but, after all, he himself admits he is a bit of a dreamer…

“What a Wonderful World” by Louis Armstrong. Herein LA simply says, “You are living in utopia, silly.” Once you get beyond your own personal BS, the world is a beautiful place. Few could have said this with more credibility than Armstrong, who came from extreme poverty and had ample reason to look at the world as a not very wonderful place at all, had he so chosen. Yet, in 1968 he came out with this incredible tribute to the global life-force.   One implication that can be drawn is that we don’t need any fancy planes for government re-design or radical plans to start all over again, we just need to work on our own attitudes a bit. I’m not so sure that nothing needs to be changed in the world, but I am sure that my own selfish attachments often prevent me from seeing what a wonderful world it already is.

Alternate Takes: One way of making the argument that, despite all the hardship of life, we live in the best of all possible worlds is to suggest that all the good and bad is part of a bigger plan that is beyond our human ability to comprehend. In this plan, there is a time, place and purpose for everything that we everything that we experience, even the most awful things. This idea is expressed in “Turn, Turn, Turn,” a song adapted from Ecclesiastes 3:1 by Pete Seeger in 1959. The most popular recording has been that of the Byrds in 1965.

“Utopia (Genetically Enriched)” by Goldfrapp. As near as I can tell, in this song Alison Goldfrapp is a superhuman (“I know everything…I am superbrain”) created through some kind of eugenics program (see title) in love with a Nazi (“Fascist baby…”), and all she wants is for her dog to be gifted with similar abilities (“give my dog new ears…make his eyes see forever”). Although this is, to my ears, a beautiful song, in a trip-hoppy kind of way, it is definitely the darkest selection on the list, reminding us that National Socialism (Nazism) was also a utopian movement of sorts, one that perhaps met the destiny of any utopian vision pursued too rigorously: the drives for purity and perfection can be the most dangerous in the human heart, which can become, to quote a phrase from Kenneth Burke, “rotten with perfection.” So call this song the dark side of “The Rainbow Connection.”

“Subdivisions” by Rush. In this classic tale of utopia gone wrong, “perfect” suburban subdivisions turn out to be a living hell of “misfits” and “dreamers,” because they offer no “charms” to sooth the “restless dreams of youth.” This song is really an Orwell-style critique of a conformist society brilliantly applied to North American suburbs. But the controlling force is not the government: it is one’s own peers. Shades of Alexis de Tocqueville.

“Welcome to the Jungle” by Guns and Roses and “The Messages” by Grand Master Flash. Both present the “timeless old attraction” of the city as a Hobbsean jungle. Who substituted a Hobbsean war of all against all for a socially coherent city? Who knows, but here are two great urban dystopian visions.

“The Sound of Silence” by Simon and Garfunkel. Ultimately, this song argues that dystopia is caused by lack of communication…