As the next band made their way through the crowd of the large, overly packed venue, eager and excited fans shoved their way towards the stage, displaying their anticipation for the next performance. “We are Curious Volume,” said the lead singer as he began to strum his guitar. In a rage of excitement fans jumped, screamed, and moshed pushing and slamming into each other expressing their enjoyment. 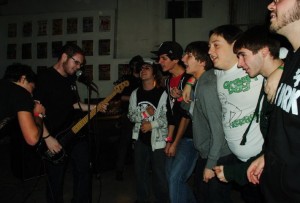 A ska/punk band from Staten Island, Curious Volume has performed their way through break-ups, fights, and the arduous task of growing up. Their ability to turn personal experiences and struggles into upbeat songs makes them a popular Staten Island based band.

Forming in 2004, it wasn’t until a year later when lead singer/guitarist Andrew “dNo” Paladino, bassist John Trotta, and drummer Cole Rice decided to seriously devote themselves to Curious Volume.

“We were young kids,” said John Trotta. “We were feeling ourselves out and seeing what we wanted.”

Throughout high school, the Blink-182 inspired band performed weekly in their hometown of Staten Island, playing at popular venues such as Dock Street and L’Amour. Through their energetic and enticing personalities on stage, catchy songs, and ability to interact with their crowd through shout outs and crowd surfing, a passionate and dedicated fan base developed. 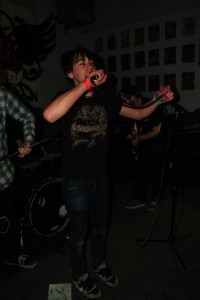 To promote their self-produced album, Curious Volume teamed up with owner of Backslash Bomb Productions and good friend Kevin Rogers to make their first music video, “About Anything.”

According to the Staten Island Advance, “For those of us old enough to remember the unabashed goofiness and fun of this music in the 1990s, it’s a throwback; an amusing story line celebrating the punk ethic of total apathy.”

Weeks later Curious Volume came out with a second music video produced by Rogers entitled, “Any Other Night.” The meaningful video has a “never take your life for granted theme,” as dNo goes through the five stages of grieving to ultimately answer the question, “If I were to die tomorrow, would I be content with my life?”

Through promotion by playing countless shows, “Mumbles and Whispers” received between 1300-1400 downloads.

In January of 2011, the band faced their most difficult dilemma yet, when drummer Cole Rice decided to leave the band.

“We were initially on the same page but when you go to school you become a different person,” said Trotta. “He just wasn’t the same person he was when we started the band and it just wasn’t right for him anymore.” 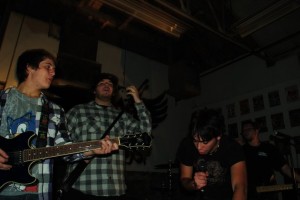 Curious Volume preparing for their performance

Quickly after Rice’s departure from Curious Volume, long time friend Zack Sandel took his place on the drums. After years of being a trio, dNo and Trotta decided to add a fourth member to the band, on keyboard.

“We always wanted to have the band a three piece, but when Brian Buchanan started playing with us we knew he was an excellent musician in other areas as well so we went against what we said and had him join the band,” said Trotta.

Finished with their second year of College, Curious Volume plans to spend their summer making new music, performing shows, and trying to get their name out there even more.

“I can tell you our band is 100% first in all of our lives and that is the most important thing that we do for ourselves. We are absolutely trying to make a career out of it,” said Trotta.

Curious Volume is in the process of getting an acoustic EP out, containing three songs from “Mumbles and Whispers.” They are also planning to come out with a seven-inch vinyl. DNo is currently in the process of writing their second album, which will involve lyrics depicting heartbreak, decisions, and leaving their immaturity behind to enter the real world.

“They always come out with new music that gets the crowd going. I really do think that they are going to make it big,” said long time fan Theresa Bessler.

Curious Volume is currently planning a 3-4 week tour this summer, visiting the North East, East Coast, South, and Midwest in continuation of promoting “Mumbles and Whispers.”

“I have always said and I always will, we will do whatever we can to be the best band we can be, to have our music heard by the most ears, and to stay as true as possible to our original feel for music,” said Trotta.