At 10 p.m., inside the Bowery Poetry Club, the stage had yet to undergo its transformation. People— jubilant, animated and perhaps even a little bit buzzed— began streaming in, pass the open doors for just $5 apiece and a single blue stamp on the back of their hands. Some stayed by the entrance, where they gained easy access to the bar, while others began to find seating in the few rows that were available. All of them were waiting in anticipation for Lorrie Doriza, a singer, songwriter, and arranger based in New York City, to take the stage.

And then she came. Doriza, a brunette with a fair complexion, had just waltzed onto the stage and for a second, it seemed that she was ready to belt out her songs at any given moment. But Stoupe, a critically acclaimed producer of the underground hip-hop group, Jedi Mind Tricks, who is known for his trademark drums and production, was not. Stoupe had plenty of other things in mind— a master plan, so to speak. The viola player, the cellist, and the two violinists on the right-hand side of the stage began tuning their instruments, creating a harmony that wailed into the audience’s ears. A quiet tension was settling into the air, as audience members began shifting their focus to the undecorated stage. 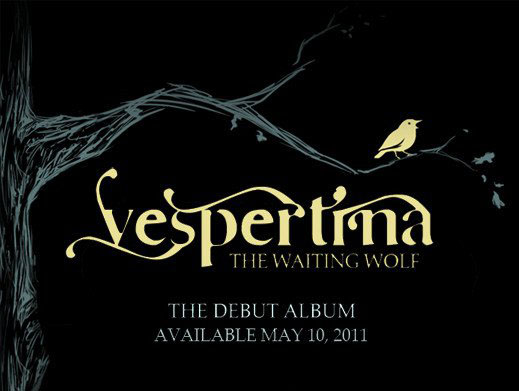 It was Wednesday, May 11, the day of the album release party for “The Waiting Wolf,” Vespertina’s debut LP album. Vespertina, comprised of Doriza and Stoupe, is a “pop tour-de-force that combines catchy hooks with the drama and fantasy of opera,” their web site states. The album, which took nearly three years to complete, is inspired by the collection of dark fairytales written by the Brothers Grimm.

Doriza, who founded her musical education on classical piano and voice, stood idly as Stoupe, who was still on stage tweaking his devices, instructed a staff member at the back of the room to change the amount of reverb on her microphone. Occasionally, she echoed his inaudible words, poking fun at Stoupe, with a wide grin that revealed the dimples in her cheeks. Her eyes twinkled under the warmth of the stage lights.

To the audience’s delight, she playfully added as if exasperated, “I’m on this mic, I’m in charge.” The audience laughed— Stoupe did too.

That was the atmosphere before the show began, but soon Vespertina would set a new tone, propelling audience members from storybook to storybook. 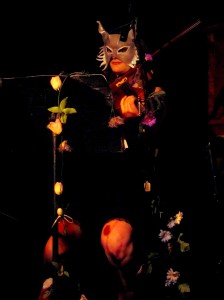 The string quartet, dressed in black dresses and black heels, would later disappear and emerge out of the backstage curtains with masks on their faces— eerie masks of evil wolves. They entwined Doriza’s microphone and their stands, where their music sheets had been placed, with strands of decorative flowers. A fairytale was in the making. 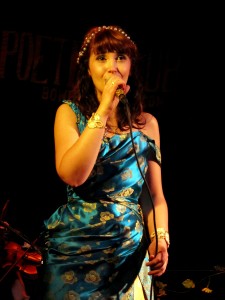 Doriza emerged, without a mask, but with a vibrant, multicolored dress, white beading and thin gold strands placed delicately on her head. Doriza was surely a down-to-earth soul, if not a little bit quirky, but her songs, inspired by opera, were purposely packed with intensity and emotion. She acted the parts in her songs, which would last for 45 minutes in total, gesturing with her arms and expressing the emotions through her eyes.

Lucid Culture, a blog that tries to spread the word about talented but underexposed musicians, wrote: “Doriza has one of those voices that comes along every ten years or so: from the point of view of someone who saw Neko Case in 1999 and Amanda Palmer a year later, she’s in the same league.”

Her album, which was sold for $5 a piece towards the back of the Bowery Poetry Club, quickly won the hearts of the audience. The stage was transformed, but she had been too.

“It’s an album written in three parts; an opera is written in 3 acts so obviously it’s inspired by the dark fairytale aspect of opera— not so much like the child fairytale—  just very Pucchini dark operas,” said Doriza. Giacomo Pucchini, an Italian composer born in the late 1850s, is most known for his operas and arias, which have become a part of pop culture.

Doriza modestly attributes her growing fame to the song, “Find a Way,” featured in Stoupe’s album, “Decalogue,” which was released sometime in 2009, almost 3 years ago.

“Stoupe had heard some of my music online and he decided let’s try working together, maybe do a few songs, see how it goes,” said Doriza. “A couple of songs into it, he asked me to do another song for his solo producer album, ‘Decalogue,’” With a laugh, she added, “So I guess it worked out, so we started working on the album, and it took forever!”