The Light and Cameras For the Future 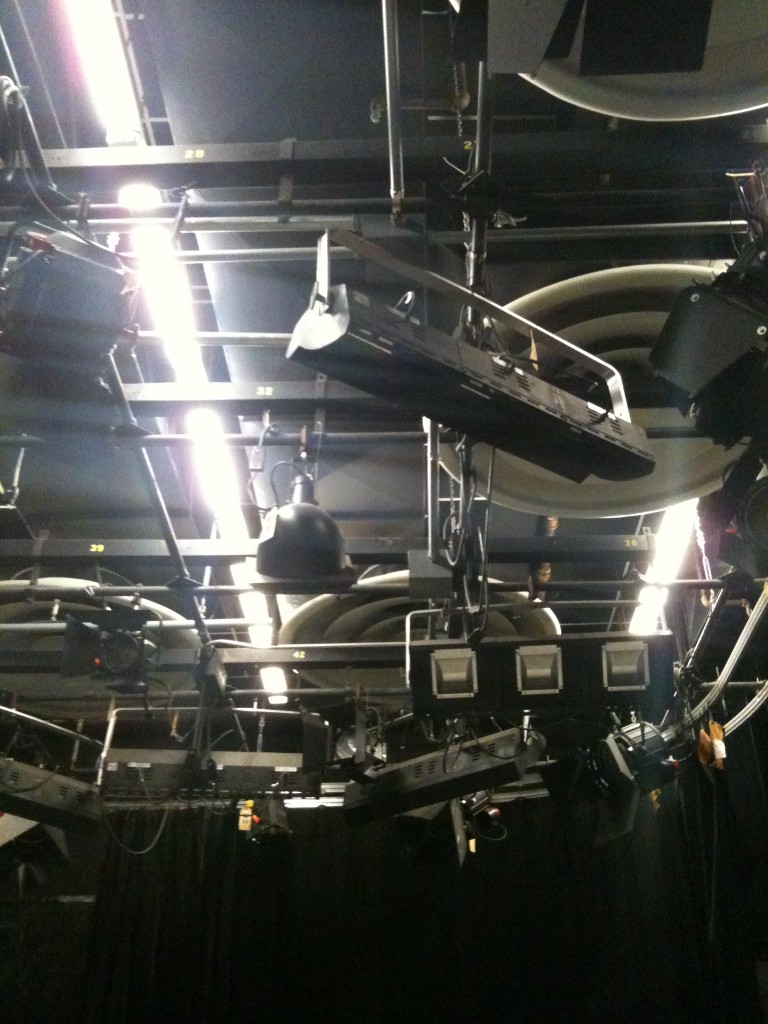 In the confined office, filled with books, videotapes and other performing arts works, the BCC Director of the Media Technology program sat eager to chat. Professor Jeffrey Wisotsky, in his leather chair conversed on the award winning program that reaches out to the hearts and minds of upcoming filmmakers, editors and the like. 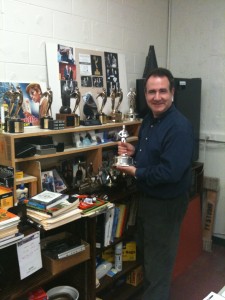 Beginning in the mid to late 1970’s, the Media Technology Program has changed quite a bit over the years. Starting as a vocational program that fixed 16-millimeter projectors, it then transformed into an audiovisual services for recording and splicing the old analog techniques that were used in the 1950’s and ‘60’s. In the early 1990’s it was changed to Television Technology and when Professor Wisotsky came in as Director from serving as an adjunct in 1996, the name was changed to Media Technology.

At that time the program made a major transition from analog to what it is today. To seek funding for the program, Wisotsky along with the program chair Debra Gonsher wrote ten successful letters for Carl Perkins vocational grants awarding the program over one million dollars. These funds were used to upgrade video and editing studio to be one the most cutting edge studios in the CUNY system today.

Professor Wistosky has worked some 18 years in CUNY along with other professors who according to Wisotsky are working professionals in the film industry. “The professors of the media technology program are here to teach and motivate the minds of our media technology students, some who go on to be promising filmmakers,” said Wisotsky. 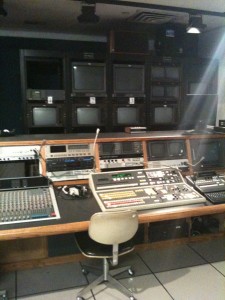 Such inspired students as Fernando Gil and Daarina Herriott are prime examples of students who not only contributed a number of successful works through the program but on their own to further their skill, repertoire, and fulfill their passion for film.

“They teach you how to teach yourself,” said media tech student Fernando Gil, award winner of the Peter J. Rondinone Memorial Award and Avid Editor Award. “I’m sort of a starving artist,” as he regretfully labeled himself. Mr. Gil has engaged in a number of projects surrounding the subject of his own blend of film genre.

In a snippet of one of his filmed shorts called, “One More Cup of Coffee,” a young man finds he’s struggling with a man constantly asking for money. This is an interesting beginning to a filmmaking start. Taking an innovative approach at blending different genres in an unexpected sequence of events seems to show the ideal mind of a filmmaker that with practice could learn to keep his audience in the edge of their seats.

Daarina Herriott is another successful media tech student also being awarded the Peter J. Rondinone Award at the 8th annual BCC film festival. She was awarded 2nd place in the overall festival and her successful film short, “Run On” was one of few chosen to be in the 2011 United States Super 8 Film & Digital Video Festival. 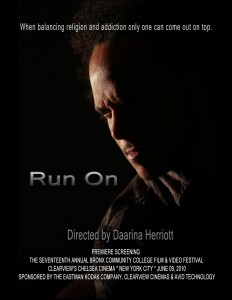 “What I’ve learned is invaluable and I hope to continue to learn as much as I can about filmmaking in the future,” said Ms. Herriott.

There are over 50 internships under such companies including Cablevision, MTV, NYC, and Madison Square Garden network for some. Including the vast connections of the media professors, as well as Wisotsky, who is a member of the Director’s Guild of America, there are many doors that lead to promising careers for the graduating media tech students, Daarina being one model student receiving an internship in Bronxnet.

At one point, the media technology program was exclusively contracted with NYCTV who took a number of media tech students under their guidance where they shot late night shows and were paid while doing it. Unfortunately the contract ended in 1997, but nonetheless many doors were made constantly available in vocational positions for the students.

A large majority of the students who graduate go on to either four year colleges such as City College for Fine Arts and Filming, according to Mr. Gil, while others take one the film positions in connection with the program. The few who don’t rush into furthering their education, take time off their rigorous film training to work on independent films to further the pursuits of this imaginative career.

The Wasp Lost Its Wings

After watching the film, “The Wasp,” and especially being told that it won an Oscar for best Live Action film in years past, I truthfully feel like it didn’t take off. Though my perspective is limited and I have an inexperienced view on short films, I personally feel there was much missing. For such a lengthy short, it lacked the strong background story as to why Zoe was without the father of her kids or why they lived they so harshly. 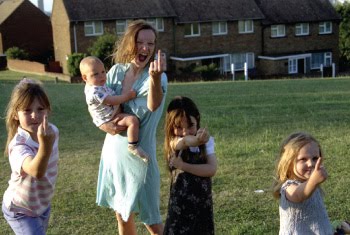 I’ve learned not to expect too much detail from a short film seeing the average can run around 15 minutes, but come on, there was no clinging of emotion. Where were the comical side remarks here or there, the feeling of anger from abuse or neglect, the sigh of relief for a successful turnout at the end.

It was almost as if her actions were okay, as a bad mother, by the way the film end. Yes, there was the woman that could be imagined by the viewer, standing out to alert and challenge the mother for not properly taking care of her kids, but what lesson was learned.

In the 2011 Oscars section for live action short films, each nomination in some way could’ve debated to have some lesson or at least understanding of the human condition. However, where is that in “The Wasp.” The mother barely has money to feed her kids only providing them with chips and a single glass of coke. She leaves her kids recklessly in the parking lot for hours on end while she relives fast moments of freedom before having kids I suppose.

I personally feel this film was an upset in its seeming lack of direction or imagination. Though the filmmaker did manage to capture some heartfelt emotion in the mother’s eyes and actions, I couldn’t help but feel my skin slightly crawl as the uplifting music at the end presents the thought that it’s okay to be a bad parent.

Temptations of the Gods can Reap Hilarious Benefits

The Oscar nominated film “God of Love” by filmmaker Luke Matheny shows to be a riveting comical display of pursuits for unreachable love that has a rather satirical twist. From the opening of the film some viewers would be oblivious to the humorous backdrop, but once the story begins and ends, it’s easy to see the humor in Mr. Matheny’s madness. From the actors and actresses amusing yet serious facial expressions, to the many witty lines that come from the narrator and main character’s mouth all played also by Mr. Matheny, it’s hard not to at least chuckle at the numerous droll scenes.

Ray (Luke Matheny) is a jazz singing, dart throwing ordinary guy, who has a one sided crush on Kelly (Marian Brock), drummer of their jazz group. After stumbling upon a box of love darts, Ray becomes insistent on targeting Kelly for her love.

Luke Matheny’s simple approach to convey how love doesn’t always go as planned and cannot be forced is ingeniously formatted in his attempt to deliver the message to the viewers. Mr. Matheny isn’t new to the conception of entertaining films especially short’s. His previous success in the video short “Earano,” which won the King Award for Screenwriting at the NYU First Run Festival, as well as well as Best Student Short at the Dam Short Film Festival in Boulder City, Nevada, proved him worthy of the 2011 Oscar Nomination for live action short film. Having directed, acted, edited and produced over several short films in his career, Mr. Matheny obviously proved to be no novice.

“God of Love” can be compared with similar romance comedies such as “The Ugly Truth,” which to an extent speaks of another sort of cupid who worked his magic through flirtatious remarks and witty banter rather than the handy love dart. And in the end with all of his handsome flare and dirty seductive conversation, he also learned that love was more complex than originally expected.

The “God of Love” was quite different in that the good guy doesn’t get the girl but the other guy on the side who has no interest does. In the end, Ray is granted the gift to become the God of love which seemed to be slightly confusing seeing his many mistakes in making other women fall for him as practice towards Kelly’s heart. The only proper and righteous choice made was using a dart to make his friend Fozzie (Christopher Hirsh) see the love stricken face of the one who desired him for so long. But who knows, maybe one good choice out of several bad ones were all that was necessary to be given the opportunity to give a gift to others Ray never really received, Love.

The Theater Missed in the Blink of an Eye

The IFC center has a different aura of sorts, unique variety of snacks, smaller theaters and more personal connection with the employees. Seeing five live action short films in the IFC had a different vibe from the ordinary big screen feel that comes to mind when watching a renowned movie. 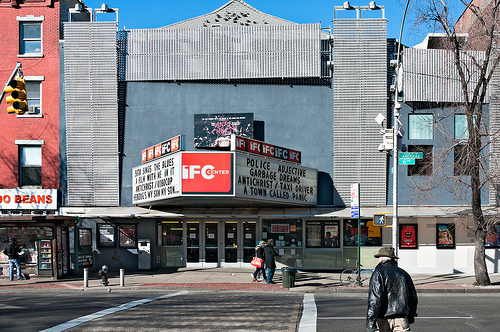 If one could imagine buying a large 72 inch flat screen television and gathering enough folding chairs, which would be the equivalent of one of theater sections in the IFC. Not to say this is a flaw, the small screen and number of seats gave off the hint of being at home, watching a movie rather than being in a large public space. Though the IFC theater is small it still fights to keep itself alive.

I do believe the films played in the exclusive center also plays as a factor when looking at the general size and concepts of the theater. Taking a walk into the small building, it is clear to see an establishment solely looking out for those trying break into Hollywood.

Independent film posters riddle the small maze like halls, and various amounts of information on tables at nearly every corner, inform people on current and upcoming shows. Though the ticket prices were outrageous being $14.00 when purchasing off the internet nonetheless, I can see where the proceeds go or at least where I hope they go.

The food was quite expensive, but from I heard it may have been worth the money. Organic popcorn was one the few unusual snacks found among a variety of candies and drinks. Inside the theater was very comfortable. Less seats packed in a small area allowed for much more leg room than the typical multiplex. My legs were fully extended in such a way that a nap seemed only minutes away. The previews were very short, only two to be exact which is my personal favorite about going to the movies, but all in all it was an interesting and comfortable experience.