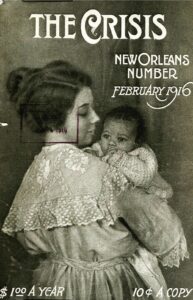 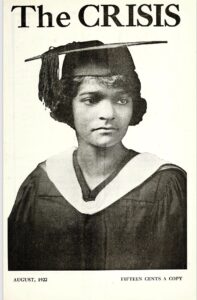 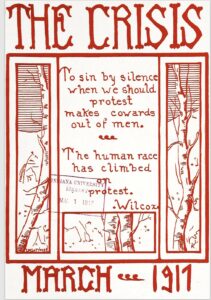 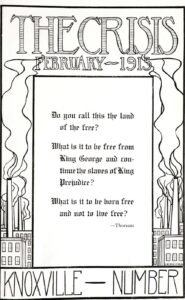 The covers of The Crisis characterize the misconstrued thoughts, feelings, and way of life that black people experience in America. These covers are for the hopeful, defiant, and blueprints for the soon-to-be black nationalists. These covers suggest that the New Negro are viable beings. That the New Negro is a survivor. New Negros  continue to evolve through their confounding experience in America. The New Negro did not die. Despite micro-aggressions and the patent target for several acts of violence, the New Negro multiplies. Beautiful black babies are portrayed with their mothers (Crisis Volume 11, Fig 1). Or these babies are portrayed on their own (Crisis Volume.5, No. 6& Crisis Volume 10, No.6). These black babies vitalize hope for the New Negro to become a black nationalist. These babies symbolize the continuation of the New Negros. They stand out to remind the New Negro that there is hope to meet others like themselves in America.  The New Negro no longer suffers an identity crisis or questions their representation in areas outside the home.

The New Negro are innovators and architects. Like Maya Angelou says, The New Negro starts to rise (“Still I Rise”). They are achieving feats that were once considered impossible. From large barriers to entry for higher education. The Crisis broke the barrier of the New Negro’s lack of nonviolent representation in the media(Henry Louis Gates, Jr., 137). The Crisis covers do not paint the New Negro with oversized features or use them for ignorant entertainment purposes. Parting through that barrier and receiving secondary degrees(Crisis Volume 24, No.4 & Vol. 20, No. 3). The New Negro is a divine athlete (Crisis Volume 22, No.5), an educator (Crisis Volume 24, No.1), and a person of endless possibilities. These covers are reframing the ignorant associations that pursued New Negro  women into educated, empowered, talented, and “sweet”  (Gates, Jr., 142), beings.

The New Negro finds love (Crisis Volume 8 No.3) with one another. Defiant in destructing their trauma. Or the newfound comfort in their shared oppression. They empathize and sympathize through their experiences. Together they are “to defy” (Gates, Jr., 147) their oppressors with their common language. Together they become a strong force with their common misconstrued thoughts, feelings, and way of life. Hope and defiance are built with their togetherness as the New Negro joins an unwelcoming society. They are defiant in surviving in this society and embarking on the blueprint to becoming a black nationalist. They are eager to share their undying love for themselves with future generations to erase years of trauma. Defiant in excess love from themselves as it is scarce from anyone else.