Across these texts, gazing or looking at “the other” is central. The gaze is represented in passing in different ways but I want to focus on passing/colorism and how it is shown in the readings. Passing (in contest of Harlem Renaissance) Typically involves a person of Black/African American descent appears to be white claiming to be white, and Colorism is Preference for lighter skin typically within a group. In Colorism vs. Racism: What’s the Difference? “According to Monks, colorism has its roots in plantation life. The lighter-skinned “house negroes” were granted benefits that their darker-skinned colleagues, who were frequently consigned to working in the fields, were not. Many lighter-skinned slaves were also the children of their slave masters, and because of their lighter complexions, they began to absorb the belief that they were more privileged or valuable than their darker counterparts. This split deepened over time and had real-world ramifications. Working in the house, according to Monk, “dramatically boosted the likelihood of lighter-skinned Black individuals (or mulattos) becoming literate and trained in a trade.” In addition, lighter-skinned Black and mulatto people made up the large bulk of the free Black population. Despite the fact that additional chances opened up for Black people of various colors following Emancipation, the significant social, educational, and economic advantages of lighter-skinned Black people unquestionably provided these Black people an enormous head start over all other Black people.” This set in motion a cycle that continues to this day. In Passing by Nella Larsen, and Zora Neale Hurston’s play Color Struck we can see just that we see how Clare and Emma acted towards this.

Starting Passing in the first passage where it starts by talking about the letter, the gaze here refers to how Irene is looking at it because of how much it stood out compared to the rest, this also captures a close reading aspect because of the symbolism used and how Clare’s letter to Irene and goes into to much detail describing it, how it’s elegant in its long envelope of Italian paper and how it seem out of place compared to the rest in the stack. (this can even foreshadow Clare’s life of how she is out of place in her race)this shows Clare’s new life compared to what irene knew how now it is fancy or glamorous. Another point in the reading that captures this gaze is with the “Hello, Nig, was his greeting to Clare”(pg 66). Referring to Jack and how he greets his own wife. Then where it talks about how She(Irene) sat there and caught her lip between her teeth and sat gazing at husband and wife as if she was holding back saying is this really happening? is Clare letting her husband, an outsider mock her race. This is where we can put how passing is shown in the reading because even though Clare passes for white, jack recalls how her complexion has changed over time “When we were first married, she was as white as-as-well as white as a lily. But I declare she’s gettin’ darker and darker. I tell her if she doesn’t look out, she’ll wake up one of these days and find she’s turned into a nigger.”(67) there’s another quote further down in the passage that really captures the gaze “Irene’s lips trembled almost uncontrol- ably, but she made a desperate effort to fight back her disastrous desire to laugh again, she turned an oblique look on Clare and encountered her peculiar eyes fixed on her with an expression so dark and deep and unfathomable that she had for a short moment the sensation of gazing into the eyes of some creature utterly strange and apart. (69) This is referring to what jack had just mentioned before “No niggers in my family. Never have been and never will be”(68) and how the gaze they gave each other is like they’re saying if only he knew.

Similarly, how in Zora Neale Hurston’s play Color Struck we have Emma, who has a darker complexion, is envious of Effie, who has pale skin,. Emma believes her boyfriend John is captivated by Effie because of her lighter skin. In scene two during the cakewalk, Effie offers Emma and John a piece of her blueberry pie, but Emma declines. Emma throws Effie a cold gaze as she walks away, This gaze right here can be seen as back away or as to say John is mine back off. To this Emma accuses John of “carryin’ on wit dat punkin-colored ole gal.”(pg 10) and john states how he only did this because Emma did not act polite. 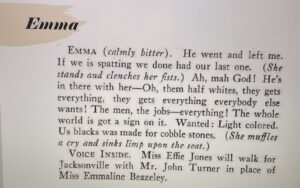 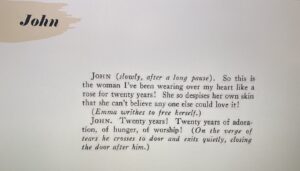 This is showing how this gaze is also carried out in other readings we even see how the gaze shows a message about how Emma’s eyes are filled with envy and desire. She is terrified of losing John,  she is constantly aware of their presence whenever he is in their sight. Emma’s notion that half-whites “get it all” this can show that its more of a watchful rather than a desirable gaze. she believes, that Light-skinned women,  are not only to be admired but also to be feared. We can even compare this to passing and how Clare passing in a way  makes sense because to survive you have to be hiding in plain sight passing can lead to getting access to that wealth.