Crisis Magazine works to visually reconcile ideas of Blackness with modernity and culture. Images of prominent and historical Black figures on the covers highlight the intellectual and cultural influence 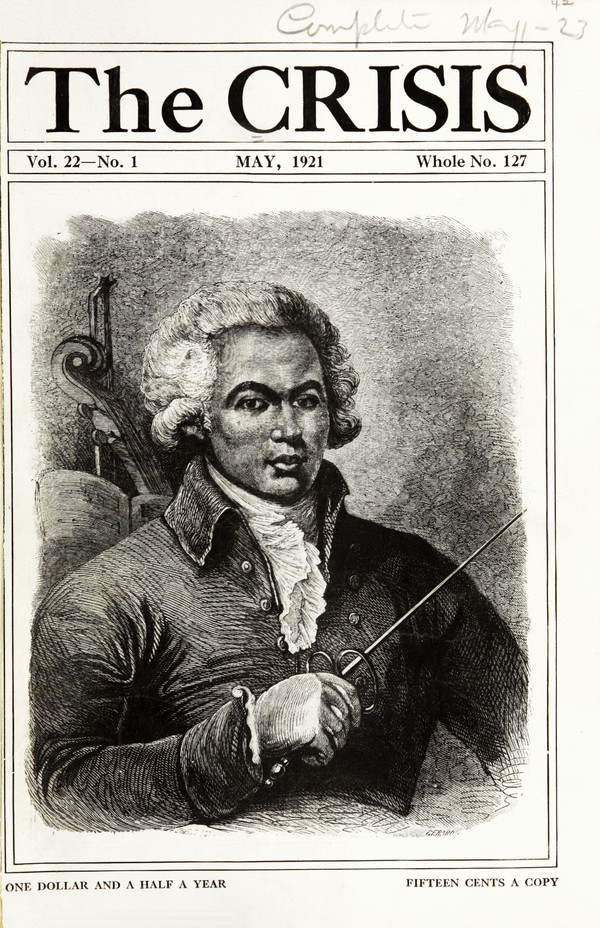 of Black people, defying the racist depictions so common at the time. Instead of stereotypical caricatures, Crisis shows Black people as participants of respectable society. Most of the women are dressed in elegant Victorian garb while the men can be seen in suits and military uniforms. They display elements of wealth, class and education amongst a variety of figures. This, of course, is done intentionally. In addition to refuting racial stereotypes, Crisis images serve to “repackage” the negro, arguing that he has evolved beyond that of a slave. As Henry Louis Gates, Jr writes in the essay The Trope of a New Negro and the Reconstruction of the Image of the Black:

“…the image of a “New Negro” has served various generations of black intellectuals as a sign of plenitude, of regeneration, of a truly reconstructed presence” (130).

The May 1921 issue perfectly demonstrates this. The cover features Joseph Bologne, Chevalier de Saint-Georges, a french violinist and composer of African descent. The issue features a biography of Bologne, detailing his many feats and accomplishments despite being a “mulatto”. Bologne, by Gates’s definition, exemplifies plentitude, regeneration and presence. His feature is just one of the many Black figures who personify this “New Negro”.

Nevertheless, the “New Negro” is in actuality a paradoxical concept. The idea relies on the theory of “newness” or a “reconstruction” of Black identity, however figures like Bologne predate the “New Negro” concept which, according to Gates, arrives in the late 19th early 20th century. The New Negro, therefore, is not new at all — he has always existed. Gates also addresses this fallacy in his essay:

“The paradox of this claim is inherent in the trope itself, combining as it does a concern with time, antecedents, and heritage, on the one hand, with a concern for a cleared space, the public face of the race, on the other” (132).

The New Negro trope demands both a new yet redeemed creation, a figure that has both transcended his past yet has no path at all. Crisis, therefore, abandons this impossible task for something more achievable. While the conventional New Negro is about repackaging or “rebranding” Blacks for the appeasement of Whites, Crisis conversely argues that The New Negro has always been. He is not a new creation, but an aesthetic that has already existed within Black spaces.

I think it’s important to note here that Crisis is primarily for Black readers. It is geared towards a specific audience with the task of producing the individual (or collective) edification of African Americans. We can see that, contrary to Gate’s discourse, Du Bois is not using Crisis to appeal to white people. He is not intent on “repackaging” Blacks for the sake of whites but is repackaging them for themselves, working to produce a less destructive narrative and give Blacks something to aspire to. Du Bois seeks to instill pride in his people in order to move towards advancement and upward mobility. While his methods in doing this can be considered flawed (using primarily light skin people on his covers) the intention, and by extension the result, is still the same.

While reading the Opportunity by Charles Johnson, the passages that stood out to me were The Corner By Eunice Hunton Carter and The High Cost of Keeping the Negro Inferior By John C. Wright because of the way perspective is utilized in each passage to explain the subtle and not so subtle wealth and class disparities in and outside of Harlem, and how such disparities are influenced by race and blinded outsiders on how rich not only Harlem’s culture was but the culture of black people in general

In Carter’s The Corner,  from the very beginning and throughout we can see a stark contrast in the lifestyles the narrator describes. In the very first paragraph, the narrator states, “My friend lives in the house on the corner. She lives high above the street in a doll’s house of white enamel and soft blues with lovely old furniture and oriental rugs of faded brilliance on dark polished floors; in a miniature home with a real fireplace and polished grasses and flowers all about in crystal bowls (Carter 114).” This vivid description is given to us from the viewpoint of the narrator who then goes through the rest of her day seeing one by one how the cars commute from Harlem to seek pleasures and entertainment and back to the suburbs located in the city. She goes on to then compare and kind of even scold the “aliens” who passed through, and reflect on how even though the night was coming to an end the city was still alive with people, sounds, and lights. She was particularly critical of how the “aliens” moved so fast that they were missing out on what was happening right in front of them, “the young boy in the corner dancing and singing the man without legs wheeled himself along on a wooden platform and with an instrument or two gave the effect of a whole brass band (Carter 114),” and how even to this day we still see this happening with street performers. 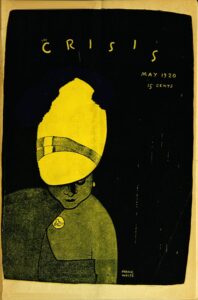 Another example that demonstrates this is the first modern jazz band to ever be heard in New York City. They played and sang in a dancing orchestra at The Marshall in Harlem and became the first to make use of banjos, saxophones, clarinets, and trap drums in combination to create what we now know as jazz. Comparing this to the Survey Graphic: Harlem: Mecca of the New Negro, “The Making of Harlem,” by James Weldon Johnson he talks about how Harlem is a “city within a city,” and how “a stranger is struck with surprise at the transformation which takes place after he crosses One Hundred and Twenty-fifth Street (Johnson 635).” He uses such a marker, as does Carter when she compares the house above to the street below to signal how different and unique Harlem was to the rest of the city at the time, especially illustrating how easily communities can change from just turning a corner or crossing a bridge.

The High Cost of Keeping the Negro Inferior By John C. Wright (p. 116) also stood out to me because of how he discusses and analyzes that because people in the south have these views and prejudices towards black people, basically caricaturing them, and how this perspective also with the years of generation after generation being taught this same information that the majority of white Americans in the South have little actual knowledge of black people. Wright illustrates this when talking about the overwhelming number of black people incarcerated in Florida and how propaganda stating that the “Negro is naturally trifling, dishonest, low and vicious,”  is used to “keep them inferior they must be huddled in segregated ghettos without drainage, light, pavements, or modern sanitary conveniences they must be denied justice and the right to make a decent living. They must be insulted and bullied and mobbed, discriminated against in public places, and denied access to parks and recreational centers (Wright 116).” This yet again illustrates another perspective, and just how to stark a contrast it is to Carter’s passage where the people of Harlem are overlooked or only seen as a pastime in comparison to the dehumanization and degradation Wright describes – except that they’re both describing different sides of the same coin, both groups being marginalized just in different extremes. 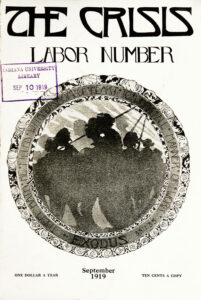 The DuBois magazine, The Crisis, and its covers also showcase both visually and in writing the thoughts and concerns of African Americans at the time. To quote Elizabeth Carroll “The Crisis offers a different collective portrait of African Americans and demonstrates that the changing identity of African Americans necessitated changes in American society and the functioning of American institutions (Objectivity and Social Change: Essays and News Stories in Opportunity Anne Elizabeth Carroll, Word, Image, and the New Negro : Representation and Identity in the Harlem Renaissance).” Two covers that exemplify this in relation to the passages mentioned previously are the cover for May of 1920, which featured the portrait of Mattie Flemming by Frank Walts, and the cover for September of 1919 which featured a drawing of soldiers returning back from WWI by Laura Wheeler. Both of these covers show contrasting images – one of affluence and the other of violence and war, and yet on the inside of their covers, both mention lynching and their continued struggle to just achieve the right to vote. The covers are direct parallels of each other and show how affluence and place did not stop the marginalization and mistreatment of black people.

Chapter 2 Objectivity and Social Change:Essays and News Stories in Opportunity” from Word, Image, and the New Negro

Harlem, Mecca of the new Negro.

Illustration/ Poetry and photography appear to be two different creative forms of art because while one uses words, the other uses images. But they have more in common than one may believe. Photos are good for providing a visual description and getting the viewer to see what the artist has captured, while illustration leads to more room for interpretation and understanding of what the artist was going for.

In Survey Graphic: Harlem: Mecca of the New Negro “The Making of Harlem” by James Weldon Johnson we are able to see how Johnson portrayed this and to answer this question of what creates a place if it isn’t necessarily ownership? is really the people, and the culture how one can create a place by finding people who can connect and relate to the same ideas and want the same outcome. “Harlem is not merely a Negro colony or community, it is a city within a city, the greatest Negro city in the world, It is not a slum or a fringe, it is located in the heart of Manhattan and occupies one of the most beautiful and healthful sections of the city. It is not à “quarter” of dilapidated tenements but is made up of new-law apartments and handsome dwellings, with well-paved and well-lighted streets. It has its own churches, social and civic centers, shops, theatres, and other places of amusement. And it contains more Negroes to the square mile than any other spot on earth.”(Johnson, page 635)

With that in mind, on page 637 there is a picture of a map “This sketch map shows approximately where Negroes live in Harlem, according to a housing survey made in 1024 by the New York Urban League. The fringe of houses in which both Negro and white tenants live is not indicated. The first houses occupied by Negroes were On I34th Street east of Lenox Avenue” I include this picture because it shows Harlem it shows a visual of Harlem and how it a “city within a city” and how much history lies there, how even today walking in some parts of the city their brown street signs instead of green to showcase that (landmarks) 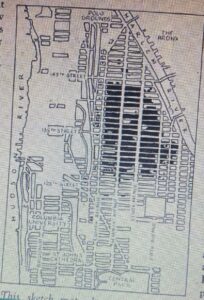 As well in  The Crisis covers where there are both photography and illustrations they are realistic since they depict the New Negro in their daily lives, one must both see and read to fully understand what  Du Bois was going, for example, to answer the question “How are African Americans or Black people (Negros in the language of the magazine) What makes them American? du Bois show many examples like the Vol. 18, No. 2 (1919-06-01) shows the soldiers go to war ready to fight for their country and stand for it, standing up for America. Also how in  Vol. 25, No. 2 (1922-12-01) cover of the magazine, features a photo of a young black woman in a cap and gown with a bright feature ahead. I would say this can make her American by following the “American dream” of getting higher educating and pursuing what comes after like a good job etc 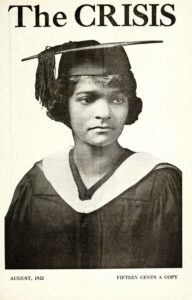