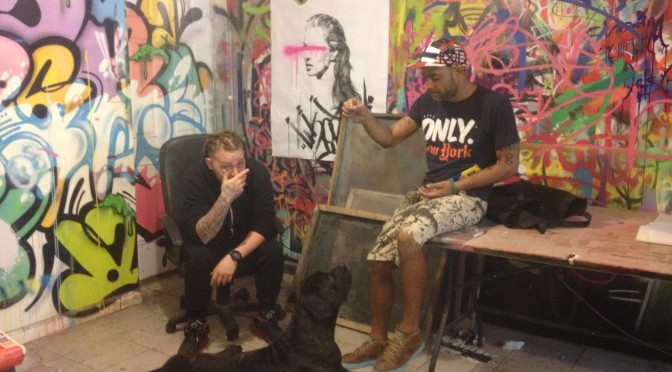 “It was different, it was rebellious, I mean it was everything.” Fernando Romero, 36, said, on the art of graffiti, as he lit his Marlboro Red cigarette. “It was a special breed back then, almost an organic cultivation,” Mike Baca, 30, interjected. Although their teen-age years as vandals were not easy, today, those endeavors have taken Baca (aka 2ESAE) and Romero (aka Ski) to great lengths.

Presently, they make up the collective known as UR New York. “UR is one thing, and graffiti is another. UR can be looked at as a brand,” Romero said, while confirming that neither one of them participates in illegal street-vandalism anymore. “We’re incorporated, we do design, apparel, art.”

URNY was formed as an LLC in 2011, with the hopes of showcasing artwork that exemplified respect and tolerance for one’s individuality, struggles and environment. Thus far, it appears they have been rather successful. “Our art work sells anywhere from $1,000 to $30,000,” Romero said. “We’ve been mentioned in publications like the New York Times, the Wall Street Journal, and Architectural Design.”

The duo has curated and been featured in over 100 shows throughout the world, including countries like Japan, Israel, Austria, Australia, Brazil, Canada, and Italy. “We stay pretty active. Our first show that we curated was incredible,” Baca said. “We probably had over 600 people there. It was amazing to have that type of receptiveness from your peers.”

Their latest show, “Product of UR Environment”, is on display at Pop International Gallery, located in the heart of SoHo, for the entire month of October.

The collaboration with Pop International Gallery, which contains art by Andy Warhol, Ringo Starr, and Dr. Suess, has allowed UR to gain international fame and clientele. However, regardless of how many clients they receive, the duo stressed the importance of maintaining intimate relations with their buyers. “Our clientele is really important to us, we’ve baptized some of their children. We’re joint god-fathers for some of them,” Baca said.

The two friends and roommates met in 2006. Romero, having graduated for marketing and advertising from Parsons, was working for the New York Sun. “I sought him out. I noticed in 2004 the burst of his art,” Romero said. “I was working for the newspaper so I was on the streets all the time. I would see this everyday, it wasn’t here and there sporadically, it was a flood.”

Baca, who was 24 at the time, was dealing with legal issues concerning vandalism. “I met him at the beginning of the madness,” Baca recalled. “I got indicted on 42-counts of graffiti. I was in [New York] Supreme Court for two years, the MTA sued me.” This indictment led to Baca to being imprisoned for three months on Rikers Island, followed by five years of probation. However, what seemed like a setback at the time only furthered their movement.

“Him going to jail led me to sell his work, to hold him down, but more to kind of immerse myself in this new thing,” Romero said nostalgically. “When I came out, we just went crazy, we literally did not stop creating art,” Baca said. So far, the duo has worked with department store giants such as Barney’s and Target. They have also presented their work in MOMA, the Sundance Film Festival, and VH1.

With their end-goal being to inspire the youth through art mediums such as photography, silk-screen, and spray-paint, UR seems to always find time to give back to the community. “We like to go into the kind of schools that we grew in, that kind that don’t really have a lot of funding.” Baca said, “We do workshops with the kids and mentor them, to show them that anything is possible. We want to teach them to stay in school especially.”

Baca recalled how much he loved to go to school mainly because there was food readily available to him. “It was just technical difficulties in the 90’s, my dad died when I was 7, my mom had a drug problem, and I was in and out of halfway houses,” he said. “I want to teach the next generation that adversity can be used as motivation to get where you want to be.”

Aside from their own events, the duo has been attending the popular Art Basel event in Miami for the last five years, where they’ve interacted with many artists from all over the world. “I met Ski and 2esae in Miami when I was 16,” said Touch, a 23-year old artist from Detroit, “They brought me back here [New York] and some of the most amazing art projects that I’ve created is because of them.”

The duo says one of their goals is to pave the way for many street artists. “At some point we’ll be expanding into a small-business consultation for artists.” Baca said. The future is seemingly bright for the determined duo.

UR has left a permanent mark on the New York City culture and arts scene, and will continue to play an important role in the rise of many young street-artists. “Just being able to do this is amazing.” Romero said, as he was editing a picture of New York on his apple iMac. “This city is brand new to me everyday, The day that stops happening is the day I stop making art.”