Skip to the content
Black and Latinx Studies Community 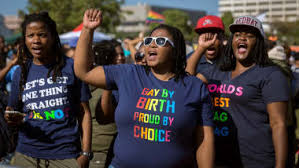 Did you know the1960s LGBT rights movement was led by trans women of color?

From Equality Archive:  “History remembers New York’s iconic Stonewall Inn as the birthplace of the modern LGBT rights movement. On June 28, 1969 it’s bar patrons clashed with the police who had arrived to arrest and shame same-sex couples who came there to dance and socialize with each other.

The Rebellion on this day now marks Gay Pride and Christopher Street Day celebrations across the world. And while The New York Times describes a recent film version of the event  to includes the “invention of a generic white knight” making it “tantamount to stealing history from the people who made it,” the truth is that transgender women of color were leading the fight.”

These widgets are displayed because you haven't added any widgets of your own yet. You can do so at Appearance > Widgets in the WordPress settings.