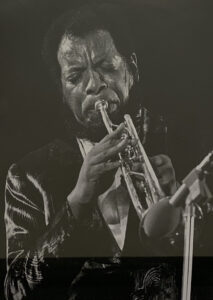 Uwe Rau is a photographer from Hamburg Berlin. The Berliner Jazztage festival (translates to “Berlin Jazz Days”) began in 1964 in West Berlin, in the middle of the separation of Germany. The festival has been dedicated to showcasing the best Jazz musicians of the day and to celebrate and further experiment with the genre. Jazz and American culture had great influence in West Berlin after World War II and the fall of the Nazi regime. This photograph depicts Ornette Coleman, who was an American jazz saxophonist, violinist, trumpeter, and composer. In the 1960s, he was one of the founders of free jazz, a term he invented for his album Free Jazz: A Collective Improvisation.