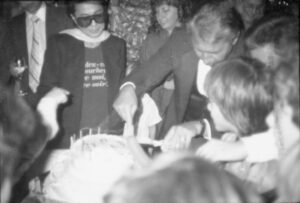 Andy Warhol was an American artist, filmmaker, director, and producer. He was also a leader in the pop art movement that began in the late 1950s. Throughout his career, much of his work included images of some of the most iconic and notable people of the late 1900s. This photograph was taken at Sean Lennon’s ninth birthday party. Which took place at the Lennon’s residence at The Dakota in New York City. There were many notable writers and artists in attendance, including Keith Haring, Jean-Michel Basquiat, Pat Hackett, Kenny Scharf, Lisa Robinson, Louise Nevelson, John Cage and Merce Cunningham.