Posted on February 13, 2011 by alexandra.torres 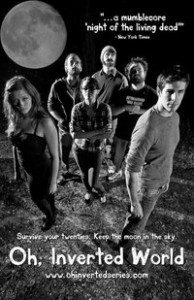 I enjoyed the ambiance created by the black and white film and the background music that enhanced each moment in “Oh, Inverted World, an indie webisode on a group of young adults chosen to stop the moon from falling into the earth.

Considering it was a low budget film, the actors seemed very natural, hence convincing . The actors in the My Lifetime webisode  “Good in Bed” were better actors. In their facial expressions you can feel the pain of the couple who can not see eye to eye and who are on the brink of a divorce. At the end, they seem truly happy when they took a nap together. However, considering the budget of the webisode, you would expect it to have better actors.

While watching it, one might almost feel they’re viewing a Hollywood film as opposed to a short webisode. I preferred the plot and even the acting, whereas the plot of “Oh Inverted World” was too weird and confusing to draw me in. My classmate Sabrina Khan agreed. “The independently made webisode seemed to ambitious. It tried too hard to be interesting but failed to keep me interested,” she said.

Putting the plot aside, however, I had a deep appreciation for the ambition she seems to condemn. Large budget films, whether short or long, have their place in the industry but the ability of a few young striving actors to put on a production minus the polish, limited monetary resources and extra man power is impressive and I admire that artistic creativity of indie films.