Indie/short films not on the cheap

Posted on February 21, 2011 by alexandra.torres

After a relatively short train ride from Baruch College, (6 train to the L train to the F train) my classmate Ashley Rudder and I arrived at the IFC Center in Greenwich Village. 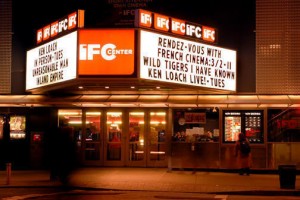 It was 1:30 p.m. and we were a whole hour early! Although I had purchased the tickets online, they are given on a first-come, first-served basis, and I was worried there would be none left.

What made me think that! Honestly, a 2:30 p.m. showing of Oscar nominated live action short films on a Tuesday afternoon is not likely to have a full house.

Off to kill some time…We parlayed about the steep ticket prices while indulging in some yummy foot-long sandwiches from the Subway restaurant a few storefronts down.

Considering that the tickets cost close to the price of a ticket for a regular two-hour movie, we wondered why that was the case. “I really enjoyed watching the short film screening,” Ashley said, “but I would have liked to pay a little less for the tickets […] I normally pay 8 dollars for a new released movie at my neighborhood movie theatre and it would have been great for these tickets to be inexpensive as well.”

Then again, we reasoned, these films are popular among the Indie/short film enthusiasts or junkies. Plus, the theatre needs to make their money.

2:25 p.m. came and it was time to head a few feet down to the theatre. My predictions of the underwhelming number of patrons were correct; my classmates and I were the majority of the viewers there.

We sat in our seats, which are way more comfy than the seats in regular movie theaters, and watched the films with analytical eyes.

It was the first time I had watched indie/short films other than the few I had watched on Saturday on Reel 13, on PBS, in which they play, “A classic, an Indie, and a Short Picked by You!”

I look forward to viewing more Indie/short films and perhaps gain an appreciation and interest for them.

3 Responses to Indie/short films not on the cheap