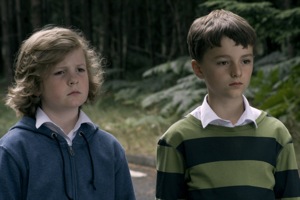 How much do people truly confess when they go to confession and how much of it is true? That is the theme surrounding the short film The Confession. The film was directed by Tanel Toom. Sam and Jacob, who are both nine years old, are best friends. Both children are each other’s foil. Sam is often quite and loves to follow the rules; Jacob on the other hand is one who likes to get into mischief. Set in Britain the story takes a dramatic turn when the young boys, who attend catholic school, are getting ready, in a couple of days, to make their first confession During a conversation with Jacob, Sam reveals that he has never done anything bad and therefore has nothing worth confessing. For Jacob this is a huge problem as so makes it his mission to change that.

As a person who is somewhat a skeptic when it comes to religion Confession was right up my alley. When it comes to confessing one’s sins how much can you truly trust a priest? What if someone came in there and said that they were molesting children, raping women or men, or planned to the night that they went to confession? As a priest would they keep it to themselves or would they tell someone? If they have to keep it to themselves how do they cope with it? I am in the mist of trying to find out these answers and if anyone could help me it would be greatly appreciated.

Jacob’s plan for Sam is that they go into a cornfield and steal the scarecrow. Of course Sam, being the good boy that he is, is a first very reluctant; but feeling peer-pressure from Jacob he finally relents. The problem occurs while both boys are removing the scarecrow and dragging it across the desolate road. As they are dragging it along they hear a sound of a car approaching. Not wanting to get caught, and fearing that they will, they leave the scarecrow in the street and run into the grass to hide.

A young woman driving the car, believing the object is a human being, quickly swerves to get out of the way; and in the process hits a tree. At that point I was screaming inside my head “do something Sam!” The driver even opens her eyes and look at the young, boys but to no avail. Sam once again relents to his friend and leaves the woman there, with a child in the backseat, to die as the car goes up in flames.

This film reminds me of Doubt; the film starring Meryl Streep and Philip Seymour Huffman. Streep as Sister Aloysius, the principal of St. Nicholas a Catholic School in the Bronx, begins to suspect that Father Flynn, played by Huffman, is abusing children. She suspects this because Father Flynn is always having young boys in his office and never gives reasons of why, at least to her liking. This film does exactly as the film title states: It fills you with doubt and it leaves you with it.

The similarity between the two films is that they raise questions about religion and specifically the Catholic religion. With religion you hardly ever get an answer and if by chance you do is it the right one? Is it true?

Later on in the film after Sam says that he will confess to what they have done regardless of the consequences Jacob and he get into an argument. It the mist of that argument Sam pushes Jacob. This leads Jacob to fall in a hole and die instantly.

At the end, however, Jacob did get his wish because Sam did not confess to any of the two events.

This is not Toom’s only short film dealing with a confession. In 1999 in his short film Desert Moon a Surgeon named Jonathan Kaufman confesses a secret to his priest on his death bed.