Tucked in a corner of the sleek and remodeled Museum of the Moving Image in Astoria, Queens, lies an elaborate Egyptian alcove.

Tut’s Fever, formally known as a movie palace, is a replication of the themed movie theaters of the 1930s and 40s.   A life-sized wooden woman, dressed in flowing white robes greets visitors from the concession stand facade. To the left, a dark, but curiosity sparking path, leads adventurous patrons through a hieroglyphic streaked tunnel, by a closed casket.  Upon pulling a lever, the casket door springs open and a  “mummy” pokes his head out with  a cigar hanging out of his mouth. 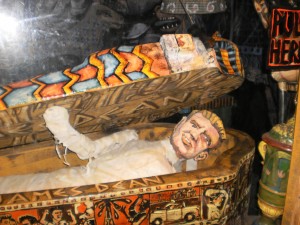 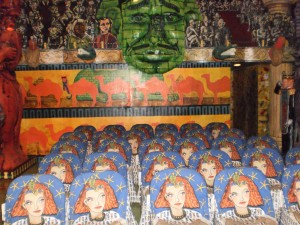 The space itself is equally as breath-taking. Large sarcophagi stand firmly (and slightly intimidatingly) against the walls, casting shadows over the decorated cloth seats.  A seemingly out of place, but still entertaining,  image of vintage Mickey Mouse and a dog adorns the curtain that pulls back to reveal a screen modest by today’s standards. 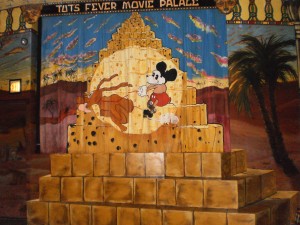 A vintage image of Mickey Mouse adorns the curtain 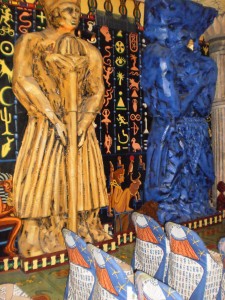 It’s intricate details are almost distracting from the film on display.

Movie palaces like this were the norm back in the early twentieth century, with less than five remaining in the New York City area (not including Tut’s Fever, which is considered a recreation). Instead of sticky floors and the incessant clicking of other audience members texting, moviegoers in the early twentieth century got to marvel at amphitheater-style theaters with ornate ceilings and luxurious, velvet curtains.

Going to the movies was a full experience. There were no distracting, gimmicky 3D graphics to distract from the film , only the film and a beautiful environment in which to watch it. Tut’s Fever seeks to recreate this joy for modern audiences by showing classic films and miniseries and using a projector.

“When they start up the projector, you can hear it. I think it adds to the experience. It’s as if nowadays when you go to the movies you’re just watching a bigger screen and maybe [the sound] is a bit more intense than if I were watching it in my living room. Movies…are now becoming very little of an experience because you can get the same feeling at a quality home theater,” said Tecumseh Ceaser, a lifelong resident of Astoria and former film projectionist.

Tut’s Fever was an original part of the museum’s plan, debuting along with the entirety of the museum in 1988. It was designed by artists Red Grooms and Lysiane Luong. In the museum’s recent expansion, a larger, more modern theater was added, as well as a screening room, but Tut’s Fever offers a unique experience to younger generations.  With its eye-catching decor, the space is able to allure children and expose them to classic films they may not see anywhere else.

Currently showing in Tut’s Fever is the series, The Green Hornet, with a new episode shown daily. The movie palace is a true representation about what the museum as a whole aims to do: expose the public to the historical part of moving images throughout time, while still finding a place for them in modern times to be rediscovered and enjoyed all over again.

As editor for the Weissman Center, Lisa received her Bachelor of Arts in Journalism and Creative Writing from Baruch College in June 2011. She co-founded the school's sole creative writing club, Writers' Society in 2010. When not working on the blog, Lisa explores interest in local reporting. She has interned at Bronxnet, the New York Daily News, and the L Magazine.
View all posts by Lisa →
This entry was posted in Independent Film. Bookmark the permalink.