Baluchi’s, Not Worth Your Time 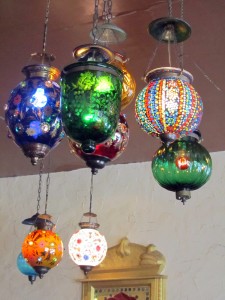 It is early afternoon at Baluchi’s, but the hanging lamps, masked by multi-colored shades of reds, greens, yellows, and blues, are turned on regardless, casting a radiant, warm glow on its tables and walls. Indian cuisine is hardly the first thing that comes to mind, with a name like Baluchi’s, but the restaurant serves authentic Indian fare.

For college students, eating out, especially in Manhattan, is never an activity that can be indulged in too frequently— but at Baluchi’s, worry no more. From 12 to 3 p.m. on weekdays, so long as it isn’t combined with the Thali lunch special or any other special offers, the restaurant takes a 50 percent off discount on just about everything else that is on its menu.

Baluchi’s has 12 locations, ranging from Park Slope, Brooklyn, to East Village to Queens. Clearly, the restaurant has done something right for it to thrive like it has in New York City, a hub for diverse ethnic cuisines. But whether that something is actually its food is up for debate. 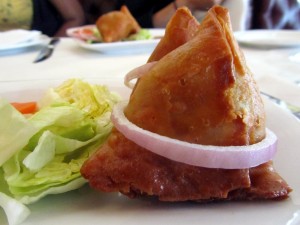 ithout the lunch discount, customers receive a plate of two samosas, which are vegetarian appetizers whose filling consists of potato, peas, and chickpeas. The samosas, though deep-fried, were much too greasy to sit well with my stomach. Even the scattered mix of lettuce, carrots, cucumbers, and onions that lay at the side of the samosas was a disappointment. On the whole, the appetizer left me with the impression that everything had been thrown down carelessly onto the plate, without any thought on the overall presentation and the restaurant’s customers.

Strangely, the entrees, forgettable and less than spectacular, did not include rice, which is usually, at least to my knowledge, also considered to be free-of-charge in other Indian restaurants like Delhi Heights in Queens. 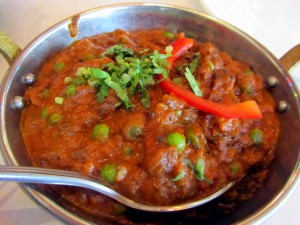 Both Bhartha, a vegetarian entrée that consists of fire-roasted eggplants cooked with onions and peas, and Kerala Boatman’s Crab Curry, a supposedly spicy seafood entrée, seemed promising at first glance. In the end, however, both failed to excite my taste buds. To tell you the truth, I don’t even think I could really taste an immense difference between the two.

I think the only reason I would go back here is for its lunch discount and its close proximity to Baruch.

3 Responses to Baluchi’s, Not Worth Your Time