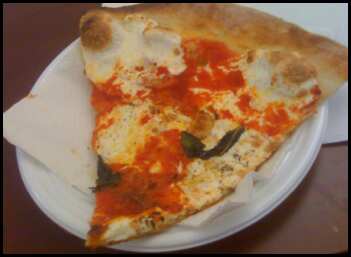 Fresh mozzarella cheese over a rich, bittersweet and hearty tomato sauce on a crispy but soft, smoky crust are the reasons why the pizza at Grimaldi’s Pizzeria are insanely delicious and always satisfying. Fortunately for loyal pizza-lovers, the famous restaurant has finally set up a shop at a closer, new location in the recently renovated Limelight Marketplace on Sixth Avenue.

Despite numerous delays, the restaurant’s staff finalized the preparations and quickly conducted their official grand opening in February. With years of family-owned tradition, service, and dining, Grimaldi’s Pizzeria has become recognized for making “the pizza that made the Brooklyn Bridge famous,” and has since expanded throughout the United States. The renowned menu offers several types of pizza with an assortment of savory toppings, hearty calzones, and a few house salads. Drinks vary from an assortment of non-alcoholic beverages and a list of select beers and wine.

Grimaldi’s Sixth Avenue location has a casual, family-style setting with an undeniably welcoming atmosphere that accents the brimming Limelight Marketplace that is full of colorful and enticing shops. After just three weeks at the new location, the line of customers has grown consistently. The wait time for dining-in varies from 20 minutes to over an hour, but customers can save time by opting to order a pie to-go instead. Taking the meal to go doesn’t take away from the experience at all. It’s still great pizza no matter where you eat it. 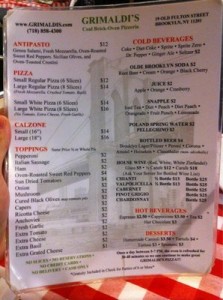 Grimaldi’s has sustained their customary tradition of serving pizza by the pie, no exception. So, for those interested in a single slice, you’re out of luck. You’ll have to place an order for their small original pizza, a serving size of three. The small pie is cut in six large portion slices that can satisfy most hungry pizza contenders.

Filled with a layer of fresh mozzarella and tomato sauce, then topped with basil and olive oil, one bite is enough to convince a single patron to happily devour the rest of the cheese pizza. The counter attendant was quick to provide me with suggestions, recommending this pie, he says “It’ a popular item on the menu and it’s the best. No toppings are needed”. I took is word for it and came back 15 minutes later for my take-out order.

The thin crust is crisp with a nice, dough-like middle. With a combination of fresh, salty mozzarella and Grimaldi’s addictive rich sauce, this might be the best pizza a patron could ever have. Each bite is savory and sweet, made complete by the undeniable, smoky flavor from the oven, which places this pizza over the top. Truly, you haven’t experienced a grand, well-made slice of pizza until you visited Grimaldi’s Pizzeria.

Initially, loyal customers may have sought out this place for the hype surrounding it as a result form the oncoming press streaming from exposure on food network and in print publications. However, they became satisfied and amazed by their well-made original pies and consistently keep coming back. “It’s a great place to come with a group of friends, the pie here is one of my favorites in the city,” said nearby patron.

Furthermore, now that the traveling time from Brooklyn is cut in half, there are abundant chances for Baruch students and pizza fans to stop by to indulge in a pan of Grimaldi’s famous pies. With their signature coal-brick oven style, inviting atmosphere and swift service, Grimaldi’s Pizzeria is a great family-run restaurant that gets your fix of mouth-watering pizza.