So You’re In A Band Too? 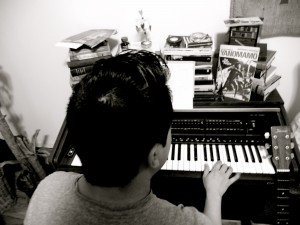 Not my definition of being in a band...

The first couple of times it sounded charming. “I am in a band,” “I play guitar,” “I am a musician.” But then I grew older, reality hit me, and today hearing these lines makes me amused, at the most. “Oh, really? Is there anything else to know about you?”

I cannot deny that I may be a bitter ex. girlfriend of a musician or two, but the story that follows is based on purely true events.

“I am in a band.” Oh yes, I’m sure these words still works to pick up girls with, or to be straight – I know it from experience. It is not too long ago when I was a naive teenager, and whoever mentioned “in a band” could probably catch my heart at that instant moment. But I have lived and learned and today I know, that a musician does not always equal a good date.

I love music, I mean, who doesn’t? But I do believe that music is to be enjoyed on a non-personal level, as a listener or spectator. Musicians can be charming, yes, and who has not dreamed about walking to a show saying “”I am with the band.” But just think about it, really. How many of those sitting down next to you at a coffee shop, taking of their sunglasses and proudly announcing “I am a musician,” does much more than play guitar in their friends basement, or write songs they never finish? Yes, exactly – not many. And the rare ones who really does live for their music, well, they live for their music. You got it – the music, not you or anything else. As my friend, himself a struggling musician, once told me: “Never date a musician.” I laughed, ignored it, and got charmed. But that was once, or twice. Now, I need more than a cheesy love song.

Today, when approached by that unfamiliar young man, I am the one taking of my sunglasses, smiling and asking: “So, are you a musician too?” Suddenly, not many wants to brag about their musical talents, but looks a little lost, thinks for a while, and says: “Well, I am an artist!”

4 Responses to So You’re In A Band Too?