A Feeling of Home With A Twist

David Burke Townhouse has been described in an array of word choices; whimsical, playful, elegant and even visionary, yet to my father Massimo Rossi, a devoted captain at the restaurant for the past seven years, his favorite adjective used to describe this four-star restaurant is simply “interesting.”

True, it is possible that Rossi has become jaded by the individualistic style choices made by David Burke on this unique restaurant, but he continuously gives credit where credit is due by insisting that Burke is his most favorite chef. “The innovative style that David uses in his food ideas is really mesmerizing,” Rossi begins “The cuisine choices that David makes really represent his personality, which is rather extravagant.”

The restaurant, located in an actual townhouse, provides a home like comfort while still remaining ornamental and focused on detail. Rossi says that the restaurant can relate to a broad variety of customers because the food itself is “accommodating to all tastes.” Rossi’s favorite meal is the cavatelli with shortribs. This platter consists of mushrooms, truffle mousse of course all over braised short rib. Rossi says the short rib is never short of “perfect”, always being tender, hearty and satisfying.

The Catavelli with Braised Short Ribs

One perk of visiting my father at work is to be reunited with my favorite dish, the Cheesecake Lollipop Tree.

It is one of the treats that the restaurant is most famous for. Each lollipop is elevated on a stand and when eaten enriches ones mouth with a different flavor, whether it be chocolate crunch cheesecake or regular with strawberry creme on top, each flavor is sure to please. To add to the creativity behind this dessert, The tree also comes with bubble gum whip cream. The Cheesecake Lollipop Tree was featured on The Best Thing I Ever Ate on The Food Network. 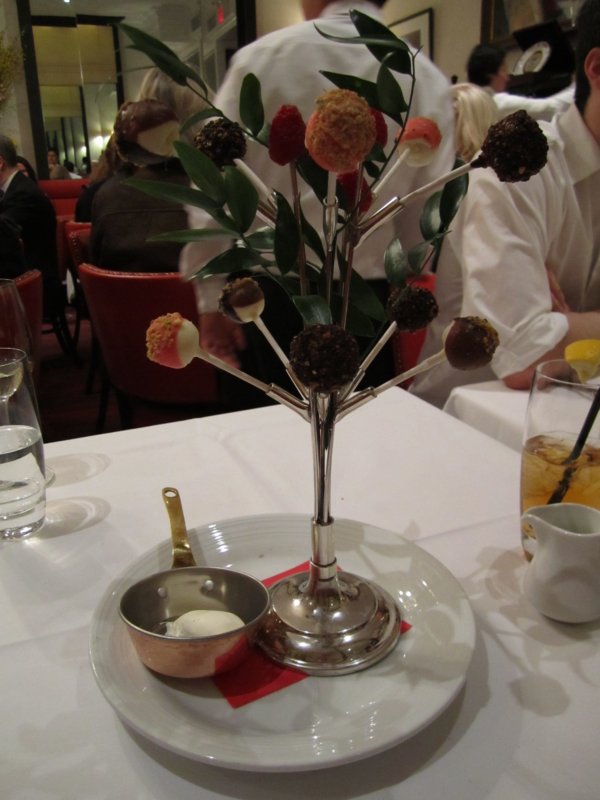 One cannot help but be mesmerized at Burke’s decorative, original and delicious creations while also being captivated by the modern art shown throughout the restaurant. The pieces he selects to be shown bring about a discreet yet glamorous aura to ones dining experience. One collection of drawings Burke has showcased is called The Key to the Kingdom created by Tony Meeuwissen. The drawings are fantastical and bring a artistic ambiance to the Townhouse that make it more like a gallery that happens to have amazing food. The balance between art and cuisine is shared perfectly in David Burke Townhouse.

Burke also combines his interests in cooking and art while remaining a true entrepreneur and inventor. ﻿﻿﻿David Burke Townhouse has been critically acclaimed. It won New York magazine’s Critics’ Pick, A 24 food rating (meaning very good to excellent) from Zagat 2011 Edition, and Time Out New York’s Critic’s Pick. “At this theatrical little restaurant … it’s a pleasure to watch the restaurant’s staid Upper East Side clientele gawk at Burke’s decorative and generally delicious creations as they go by.” Said New York magazine and Time Out New York commented “David Burke, the culinary merry prankster that knows how to cook.”

David Burke has made himself one of the leading pioneers in American cooking. He grew up in Hazlet, New Jersey and has always been inspired by French chefs and their techniques. He has a fascination with the power that individual ingredients have over the entire meal and the components he puts into his meals to turn them into works of art. Burke has a career fueled by creativity that provides him to have revolutionary products and cooking techniques. He has been featured on Iron Chef America and has opened seven restaurants throughout America.

Winning numerous awards for his culinary skills, it is understandable why David Burke is considered one of the best modern American chefs by one glance at his menus. Ranging from pretzel crusted crab cakes to tuna burgers with lemon French fries and spicy mayonnaise show how avant garde Burke can get with his meal choices.

Massimo Rossi has had prior experience as a captain at Le Cirque 2000 when it was at the Palace Hotel. With these duties, it is Rossi’s responsibility to not only direct but to supervise and train the fellow servers in the restaurant. He monitors their work habits in the dining room while handling the seating arrangements for the guests. He will at times serve tables to which he suggests food courses and appropriate wines to ensure that the guest has an amazing dining experience.
Rossi always knew he wanted to be in the restaurant business. He left his small hometown in Italy and went to the Culinary school in Switzerland when he was 16. Since then on he has worked on world-wide cruise liners and top of the line restaurants but claims that working for Burke has been one of his favorite experiences “I have really watched the restaurant grow and develop into this amazingly elegant yet casual restaurant that is nothing like anything else around. I also think its great how accommodating the food is to every palate, it makes me feel good that what I have invested my life in what can make a lot of people happy.”