Melvin Van Peebles is cooler than your grandfather.

Case in point, the controversial 78 year old singer/director/actor/writer still regularly performs with his band, cheekily named Laxative (because, according to their Facebook page, “they’re a crew of musicians who make sh** happen and get sh** done”). 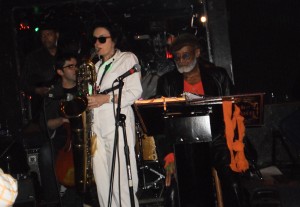 Encouraging audience participation and often referring to his band members as “brothers and sisters,” Van Peebles created a sense of community while sharing songs about relatable struggles such as heartbreak and financial hardships. The venue, Zebulon, instantly transformed from a standard Williamsburg bar into what felt like an intimate gathering in someone’s living room.

Though Earth, Wind, and Fire famously performed the soundtrack for Sweetback, Laxative does not possess their same finesse. While including a similar fusion of funk, soul, and blues, the band is more subtle and consists of a calculated roughness.

Performing regularly at local venues such as Zebulon, Laxative also plays internationally, having recently done a show in Paris in February. The audience consisted  mostly of 30-somethings and hipsters who just happened to stroll into the bar.

During intermission, Van Peebles mingled with members of the audience and his girlfriend, who, he joked on stage, was not his niece, but his “squeeze”.

A true character, Melvin Van Peebles himself is almost more entertaining than the band’s music.

During one of the songs, the band crooned, “We’re all just actors in life’s play” and going to see Laxative is like being a part of an underrated off-Broadway play- unexpectedly fun and entertaining.

As editor for the Weissman Center, Lisa received her Bachelor of Arts in Journalism and Creative Writing from Baruch College in June 2011. She co-founded the school's sole creative writing club, Writers' Society in 2010. When not working on the blog, Lisa explores interest in local reporting. She has interned at Bronxnet, the New York Daily News, and the L Magazine.
View all posts by Lisa →
This entry was posted in Music, music reviews. Bookmark the permalink.

2 Responses to MVP, Still a ‘Baadasssss’