By 1 a.m., the room was already charged with energy and excitement. Drinks held in gesturing hands were only slightly responsible. Lively chatter intermingled with the wistful, acoustic blues storytelling sung by Renard Harris‘ harmonica. But his deeply soulful music was not the centerpiece– it was only the backdrop, the calm interlude, to the already-building energy that would soon explode. 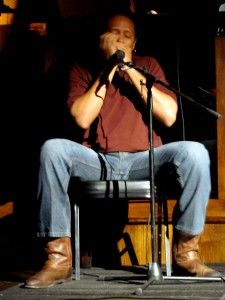 Renard Harris on his harmonica

Something big was happening inside this small room, a music hall in East Village known as Drom. Drom had become the venue for the BoB Quarterly show, a competition that brings into the spotlight on a quarterly basis a diversity of up-and-coming bands. At 10 p.m. on Apr. 30, a Saturday night that was already simmering in blossoming romances, laughter, and life, Drom had opened its doors for $20 a ticket. The room was filled, packed with raw excitement from customers prepared to stake the next 6 hours of their night waiting for the competition’s 3 judges to make the final call.

It was finally time– time for Bad Buka, one of seven bands competing at the event, to take the stage. As other bands had done, Bad Buka, an eight-member band made up of 4 men and 4 women, began playing a 30 sec. preview– offering a taste of their gypsy punk rock to its standing audience members. Everything came together beautifully; the crowd was stirring, preparing to be amazed.

And indeed they were, though for reasons not entirely innocent.

The vocalist, a tall, long-haired man, first sang “Sister Mary,” as two female vocalists swerved their heads and swung their arms to the rhythm of the music. Occasionally, their voices came in, but mostly, their voices remained unheard, lost by the sounds of the strumming guitar, the drums, the trumpet, and the violin. As the first song ended, the two female vocalists, on opposite sides of the male vocalist, synchronized to bend their bodies to the same posture. It was dramatic, as so many of their movements later were, but the meaning behind their songs were entirely lost. 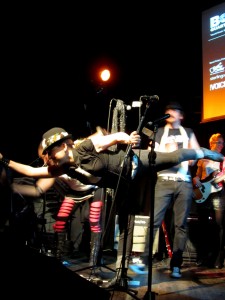 Perhaps it was the diversity of the other bands that had already been showcased, but Bad Buka, a band which brings their “lively Balkan roots to NYC with the richness of world music, punk rock attitude, and even the spunk of ska,” was nowhere as sophisticated and diverse in sound. The excitement from the audience, though visible and undeniable, was engineered. They cheered, danced, and even jumped, but only after they were prompted by one of the female vocalists.

Undoubtedly, Bad Buka was successful. But by relying on gimmicks, rather than their music, their songs began to feel oddly similar and distasteful. Nonetheless, they were chosen as the People’s Choice and won third overall.

But gimmicks can only get you so far.