When they’re setting up on stage you get a sense that A Great Big Pile of Leaves has done this before. Every tuning solo, every beating of the snare, and even the steps they take over tangled wires connecting guitars to amps to the sound system seem inveterate. I believe this band immediately, at least more than I believed the last group, Two Lights, a band still riding the coattails of the Jonas brothers.

Highline Ballroom is comfortably packed by 10pm when the guys take over the stage. The mostly underage crowd, sober from the previous act, begins to pour from the awkwardl 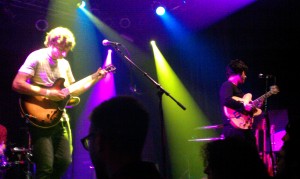 y placed dining area on the edge of the venue. Fans scream “Yeah Tyler,” as they come closer to being ready. I remember that overwhelming anxiety when I performed with my band, Pyramus and Thisbe, senior year of high school. The Leaves don’t seem phased a moment away from breaking the silence on stage.

“Why won’t they start already, so we can get out of here,” said Theresa, my classmate, forced to a Thursday show in midtown Manhattan, an hour away from her home in Staten Island.

With a heavy flannel shirt and a heavier beard, the drummer announces the beginning of the set with a banging of his sticks. Immediately I see he is going to be uncomfortably sweaty, but not enough to merit removing his shirt like Travis Barker. The music carries a fast upbeat pace, which burns a significant amount of calories but requires very little skill. The guitarists play bright chords, e 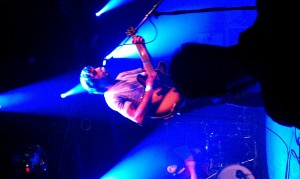 xploring the clarity of their Gibson’s and Epiphone’s, and the bassist glides between a good range of his instrument. It’s fun, and the lead singer breaks out in fervent staccato grunts that strike emotional chords. His presence is strong on stage, as he strums his guitar with calculated precision that make his biceps swell and his forearms vascular.

He’s less clean cut than in the bands music video for the song Aligator Pop . His beard is scruffier, his sh 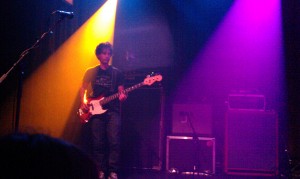 irt wrinkled and his boat shoes worn below tarnished blue jeans. The second guitarist, a hired gun for the tour, is wild and dressed in black from head to toe, appropriate because he kills it the whole night. The bassist looks out of place in this band of hipsters, but after the first song boasts, “It’s good to play at home. Well almost, I’m from Brooklyn.”

The rest of the concert neither added nor detracted from the enthusiasm of the crowd.  The same trio screamed “Yeah Tyler,” the same fans danced, and people who knew the lyrics sang bashfully. “It felt like one long song,” adds Theresa as she exits the venue, disappointed. I nod and agree, but it’s one long song I enjoyed listening too.

231 Responses to A Great Big Pile Leaves You Wanting More