If you’re aching for a taste of delicious Chinese cuisine and you could go anywhere in the world, where would you go? I am hoping that in engineering this question oh-so-subtly (and ingeniously), that you will arrive at the answer I am searching for. But if you still don’t know, here’s a REALLY BIG hint: remember that REALLY BIG landmass in Asia that’s in the shape of a rooster that all of you guys probably came across in your Social Studies class back in middle school? Yea, jog those memories of yours. I’m talking about China.

at’s in China that you couldn’t find here? I’m sure all of you are thinking along the same lines as I am– the quasi-Communism that exists there and the daily propaganda that the Chinese government regularly feeds to their people, right?

Wait a second, hold up, OOPS. I’m talking about food.

In China, I thought I was in food heaven. It had everything I liked, from savory wontons in soup to my favorite noodles, zhajiang mian, to mouthwatering dishes with eggplant or stinky tofu, two things I absolutely abhorred before going to Nanjing.

So imagine my disappointment when I was studying abroad at Nanjing University for three-and-a-half months last fall and was desperately missing my mother’s delicious vegetarian baozi when I discovered that they didn’t have the kind my mom made. I’m not talking about any old vegetarian baozi, I’m talking about the kind that has glass noodles, small squares of tofu, slivers of carrots, and pieces of wood ear inside them. They are irresistible and apparently, hard to find in China. I mean, who knew right?

Now, I wouldn’t call myself a vegetarian, but my mother, being the health nut that she is, habitually cooks more greens than hearty strips of pork and savory slices of beef. Salt, sugar, and especially soy sauce, are never used in excess and sometimes, they’re even left out. I’m pretty used to it though and now, I think I love it.

Before we go on, let me make this clear. You can put just about anything in the fillings of baozi— there really isn’t anything, any combination of ingredients, that is wrong. It’s all based on your judgment, so if you think that combo A is probably better tasting together than combo B, than stick with combo A.

Because there is no right or wrong, though, it has made my life extremely difficult, or at least my pursuit of it. That perfect baozi seemed lost and hidden in the vastness of China. I mean, what’s the likelihood that people would put the exact same fillings in baozi anyway? Highly unlikely, no doubt about it. 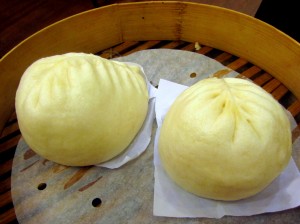 So when my boyfriend told me that I could find them at Mama Su’s Grill & Steam in Bayside, New York, I couldn’t believe my ears. Here in New York City of all places? I sighed. This was a scam, it just had to be. They were bewitched by these fakes, these poor imitations of the baozi my mom likes to make. Who else could recreate home, besides my mom?

Even despite all my negative sentiments, I still  wanted to try it. I just had to. I couldn’t very well not eat it, and lose an opportunity to say: “The ones from home are better.” So when two buns arrived in front of us, one for my boyfriend and the other for me, I was prepared to be disappointed. And suddenly, BAM. It hit me just like that. This was definitely a taste of home. I was shocked. Who knew that the vegetarian baozi that I had been searching for endlessly in China would be found right here in New York. Now that’s really surprising.