Subscribe to EOC on social media to get up-to-the-minute event updates + networking opportunities. 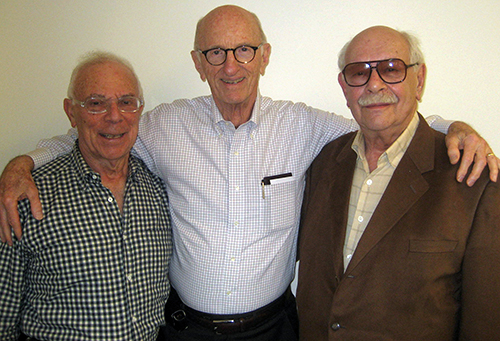 Richard Merians
Richard S. Merians is the Chairman and Chief Executive Officer of Home Delivery America. Mr. Merians founded the company in 1965 as a delivery firm. It has become one of the largest furniture and appliance warehousing and home delivery companies in the country with more than two million pieces shipped annually. HDA clients have included Sears, Macy’s Department Stores, May Department Stores, General Electric, Bob’s Discount Furniture and Home Depot. In 1994, Mr. Merians founded Hygrade Integrated Logistics, which focuses on delivering large merchandise over the internet. In 1987, Hygrade became the first distribution company in the furniture industry to install a barcode, radio-frequency warehousing and delivery systems. The company’s latest project – High Velocity Distribution – is the industry’s first program that links manufacturer and customer through an electronic merchandising and distribution network.

Paul Koren
Mr. Koren is a retired partner of Goldstein Golub Kessler LLP, a large regional Certified Public Accounting firm and managing director of American Express Tax and Business Services. As the Senior Audit Partner at GGK, he managed the firm’s audit practice and provided audit services for a diverse clientele in both the public and private sectors. Mr. Koren developed the firm’s hedge fund practice which grew to become one of the largest in country. As an early leader in accounting for hedge funds he developed many of the methods employed in accounting and auditing such funds. At American Express he provided managerial and accounting consulting services to many of the company’s clients. Mr. Koren represented his firm before regulatory bodies, including the United States Securities and Exchange Commission, lectured extensively on accounting matters and participated in numerous industry-wide conferences. He has co-authored, with Advent Software, the book “Understanding Partnership Accounting. Previously he worked in-house as a divisional controller of Litton Industries. He is a Certified Public Accountant and has both a BBA and an MBA from Baruch College.

Mr. Koren is one of the founders of Baruch College’s Executives on Campus and is the Coordinator of The Executive Student Partnership, the group’s mentoring program. That program provides one on one mentoring to over 150 students at Baruch. Among his other pro bono work, he is the co-treasurer of the Young Adult Institute, a leading social service agency providing services to the developmentally disabled. YAI services include group homes, medical clinics, day care centers and special needs schools.

Norman Brust
Norman Brust received his BBA- advertising major from Baruch College in 1955. Since then his entire career has been spent in the fields of marketing, advertising and public relations. For most of that time he has focused on the telecommunications and information technology industries. He worked for WorldCom when it was a start-up division of ITT, for MCI when it first began operations in the early 70’s and, most recently, for Contel Corp. which merged with GTE in 1991 and then with Bell Atlantic to become Verizon. His last position with Contel was VP Corporate Communications with responsibility for public affairs, media relations, corporate advertising, investor relations, employee communications and corporate giving. As a corporate officer, he also participated in all strategic planning activities. Mr. Brust and four other alums founded the Executives on Campus Program to encourage volunteerism and engagement in the Baruch community.