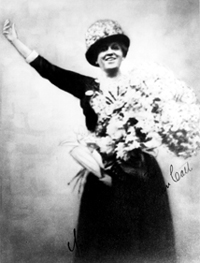 Carrie Chapman Catt born January 9, 1859 was known as an activist, reformer, teacher, reporter, but most importantly as president of the National American Woman Suffrage Association in 1890. She had an important role in the final passage of the 19th Amendment in 1920. She campaigned around the country so that states would reform giving passage to the 1920 victory which gave women the right to vote nationwide.

Catt’s motivation to fight for women rights sparked when she was in high school and introduced to Charles Darwin’s “Origin of the Species.” She saw evolutionary sciences as offering the idea of a constantly evolving and improving world, moving toward a free and peaceful society, therefore sparking her interest in wanted women rights to evolve.

Questions I would ask Catt today:

1)      How does it make you feel that we have come so far with women rights, but we now see these young women today, specially teens feeding in the hyper sexualized view of women today?

2)      How do you feel that many people still have the perception that female power equals bitchiness and man eater versus a powerful man equals confidence and competence?