Historical Context of ‘Na Wewe’ Proves Itself as an Oscar Frontrunner

Posted on February 27, 2011 by jerrica.williams

In 19 minutes, the cold-hearted truth of the Rwandan genocide and an almost seemingly non-fictitious tale of an everyday occurrence of Hutus vs. Tutsis in Africa is combined to create a storyline of actual reality and importance. Directed and written by Ivan Goldschmidt, Oscar Live-Short nominated drama film Na Wewe sheds light into an historical subject without the bore, while simultaneously not being painfully gruesome. It presents itself as a typical day, where death is only natural, even in the most horrific terms.

“His short is both critical of the racial situation there and the role Europeans have played in it,” says Maria Garcia of The Film Journal. “The title Na Wewe, or ‘you, too,’ is obviously a direct challenge to viewers to imagine themselves as a victim of racial discrimination.” Na Wewe, set in 1994 Africa, tells of a group of ordinary people traveling on the road when their minivan is stopped by members of the Hutu army. As the leader seeds through each individual searching for any Tutsi enemies, the group fears for their lives. Watching the group beg for their freedom, a Caucasian male foreigner witnesses fearfully from inside the van.

What makes this film Oscar-worthy is the truthful eeriness at hand. The theme of death and children is easily noticeable in this year’s Live-Short nominations. What makes Na Wewe special is its ability to show a child that is the result of an evil environment. The film presents children gun in hand and an expression that would put fear even into an adult’s soul. They have completely lost their innocence, if it was ever there to begin with. From ages 16 to as young as 6 or 7, they are already in the army, ready to kill any person who steps out of hand. 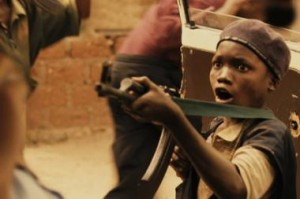 Child Killer of the Hutu Army in Na Wewe.

It’s historical context is easily comparable to the acclaimed 2004 film Hotel Rwanda. Na Wewe almost could have been inserted into the film. Both films engross the audience to feel compassion for the horrible events that took place in 1990’s Africa. What Na We We does however, is attempt to provide a comic relief at the end to lighten the load of the the rest of the film. Rather the viewer found it to be cheesy or successful, it is undeniable that the director attempted to showcase that despite their rivalry, the Hutus and Tutsis had, after all, similar interests.

Through the tool of fear, compassion, and the will to want to help those in the film, Goldschmidt excellently portrays history through a short film, an insanely difficult task. Na We We is definitely a front runner for the Oscar win.