The Crush aims to lighten the mood

Posted on February 28, 2011 by alexandra.torres 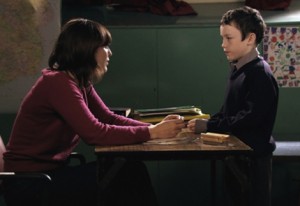 The Oscar-nominated live action short film The Crush takes the universal theme of the childhood first crush, gives it a grave and solemn twist then progresses, to the audience’s surprise, to an unexpected humorous turn of events.

My classmate Ashley Rudder shares the same thoughts. “The Crush successfully took the relatable emotion of liking someone and created a story of a schoolboy chivalry that was comical!” Rudder said.

Considering that the film was only 15 minutes long, writer and producer Michael Creagh was able set up an effective progression of crucial events: from Ardle Travis (played by Creagh’s son Oran Creagh) declaring his love for his elementary school teacher Ms. Purdy (played by Olga Wehrly), to his challenging Ms. Purdy’s fiance to a dual with guns, to what the audience initially thought would be a tragic ending.

It was uncertain whether Ardle, in his jealousy and anger, would show him mercy, which made Ms. Purdy’s fiance’s  death seem almost imminent. However, Creagh did not have intentions of allowing the audience to mistakenly think they knew what was next.

Death was a theme, however, as it was with all the other live action short films, whether serious, humorous, or both glum and comical like The Crush.

This was the case with Wish 143, about a terminally ill 15-year-old who’s wish is to lose his virginity before he dies. Although it is heart breaking to see David deal with such adverse health issues, comedy is incorporated throughout especially when he turns down an older woman that wants to make his wish come true.

Although both shorts are amusing none the least, the characters gracefully accept and embrace the fact that their initial life plans were not brought into fruition, but they did have a good laugh about it.

1 Response to The Crush aims to lighten the mood