When There Is Nothing To Confess

The Confession directed by Tanel Toom, is a phenomenal and brilliantly created film that brings its viewers everything from drama and mystery to suspense and tragedy and it also, very successfully, brings innocence into the picture. A film so extraordinary that leaves the viewers wanting more, wondering and questioning what would have happened if the film would have simply kept on rolling.

The film, set in a small town in England, greatly influenced by religious beliefs,   follows the story of Sam, an innocent 9 year old who is close to facing his first confession. His only problem: He has nothing to confess, something that brings him continuous anxiety. As a result, his friend Jacob assures him that together, they will come up with a sinful act that would allow Sam to face confession properly.

At this point, the film takes a dramatic turn when Sam and Jacob decide to take a scarecrow from the cornfields and place it in the middle of the row as an effort to scare Sam’s father. Not thinking of the consequences of their acts, Sam and Jacob witness the horrific death of three passengers of a passerby vehicle but Sam and Jacob are more concerned with hiding the scarecrow and making sure no one ever finds out.

“It was an accident” is all Jacob keeps assuring Sam hoping he will eventually be convinced but Sam’s consciousness tells him otherwise. The film goes from wanting something to confess to having something to actually confess but not being able to do so out of guilt.

Tanel Toom is known for producing films that speak to the heart; films that would impact his audience. He is known for incorporating religion and death in his works. An example would be The Second Coming(2008) about a soldier who is having a hard time coping with the death of his brother.

Let’s not go without noting how well the acting helped the film deliver its message. Both Lewis Howlett who played Sam and Joe Eals who played Jacob did an extraordinary job with the acting. They were successfully able to reach the hearts of the viewers and send the right feelings whenever they needed to be sent.

It is not a mystery as to why The Confession obtained an Oscar nomination, because no other short live action film was able to bring together such a variety of genres in just one short film as well as The Confession did. 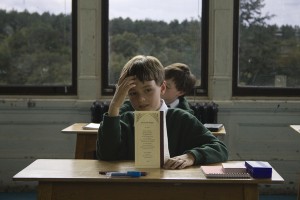 Lewis Howlett as Sam in The Confession