Poverty Can End on a Good Note 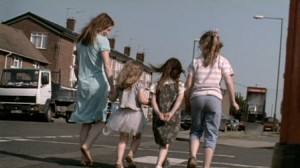 Andrea Arnold’s 2005 short film Wasp, follows the lives of a mother and her four young children as they struggle to survive the brutal conditions of poverty and hunger.

Arnold’s film stands out from other short films with the same theme by leaving viewers with an impact so powerful, they actually feel as if they are witnessing Zoe and her children’s existence first hand.

What made Arnold’s film as exceptional as it is, was its reality. Children forced to watch their mother fight and curse, having to eat crisps and coke for dinner, forced to sit outside of a rundown bar as their mother attempts to seduce the man inside, and more tragic and heartbreaking scenes that are unfortunately not that uncommon.

As I watched this film I could not help but feel bad for these children and their situation. Each scene progressed with a feeling of suspense as to what will happen next. Would one of the children die from starvation? Get kidnapped? Hit by a car? Or, as the film suggested, die due to a wasp sting?

What intrigued me most about the film was the ending. The mother and her children driving away in a car listening to an upbeat song and singing to it, as if they had no problems at all. This song was a symbol of hope, that this family took a horrible situation, and proceeded to see the good.