All it took was an industrial, truck sized shredder chewing up paper on park avenue and 26th street for me to realize how the Safdie brothers films had come to change my perspective; I saw this otherwise ignorable event convert itself into something full of New York attitude, hidden underneath layers of stimuli.

I first experienced their strange take on cinema verite in “Daddy Longlegs” at a screening at IFC. I immediately gravitated to their style of shooting that led me to their “buttons.” 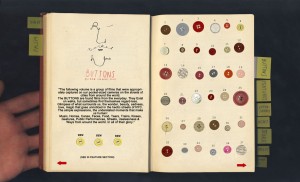 These little pieces of plastic that adorn clothing, are sprawled out on two pages of RedBucketFilms.com, highlighting moments in the fabric of new york that sometimes go unnoticed and overlooked: the music of a subway performer, the bewildered look of a drug addict waking up, or the losing lotto tickets that litter the sidewalks. “Seek out meaning always! There’s a lot in NYC. Narrow perspectives are important, they’re all we really have as humans. Get to the real neighborhoods, be a part of your real neighborhoods. If you’re inspired by a person on the subway or street, talk to them. Put them in a movie. The wold is about magnetism. Share that,” was Josh Safide’s advice to any aspiring New York filmmaker in an interview that had to take place by email because of their busy schedule.

I’ve run in to them twice on the streets of Manhattan however. Once I passed them while working, investigating if Bellevue Hospital hired outside crews to cleanup the snow that gathered in the front of the main entrance. I wouldn’t have recognized them if I hadn’t run in to them by chance months before after their premiere of “Daddy Longlegs.” They were standing in the lobby in front of glamorous lights that made them out as rock stars, I was starstruck, but the second time around they seemed human. 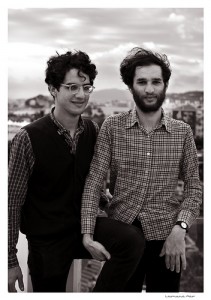 Josh and Bennie are difficult to explain. Josh has an incredibly reserved look that coupled with an incredibly charismatic personality extracts from you an honest voice. He has developed in to, if he hasn’t always been, a director.  Bennie hides behind thick glasses and stylishly composed outfits. He is the cinematographer, and his attraction to image is written plainly on him. They often appear in the films they make, like playmates experimenting with each other on the medium of film. “So many people only have themselves to talk with. Benny and me have different outlooks on the world, but very similar sensibilities and passions, which creates a very impassioned yet balanced perspective,” replied Josh to my question about sharing the experience of making films with his brother.

Their films are rogue, and they are out to capture every little moment that defines a piece of New York. Moments like my classmate Ashley Rudder’s encounter with the filmmaker who sells his movies on the train. She was able to share this with us because of someones camera, most likely embedded on a cell phone. Cell phone cameras are estimated at more than 1 billion, with an anticipated 800 million camera phones to have been sold in 2010, according to an article in the Economist. In Iraq, when the former dictator Saddam Hussein was executed, it was recorded on a cellphone camera. This moment was as historically monumental as it is shocking to see.

The Safdie brother are breaking ground with their use of cellphone cameras, something Jean Luc-Godard, a master of the french New Wave, does in his latest film, “Film Socialisme.” Resnais also shares a love of dialogue as poetry with the Josh, evidenced by the subtitles to the french audio written out in what he calls “American Navajo English,” something hailed as an art piece of its own. “Maybe that’s why I’m so attracted to poetry, specifically poetic prose, because the word use is potent. I guess we’re interested in potent dialogue. That’s how we approach scenes in a directing sense. We toss the “script” out the window and hold onto a few vital words or lines and makes sure the characters says very few specific things,” said Josh.

The Safdie brothers are critically appreciated but not commercially successful, something Josh accepts as a truth because of their “uncompromising” nature. They refuse to stop making something significant for something commercial, like in the failed converse commercial. It’s hard to appreciate them at first glance as you warm up to the reality they create, something almost too lifelike to be fiction. It’s a freeing feeling watching their films, that something this fresh is still possible with such a tired art.