There’s nothing like a nice sunny day, where fellow patrons can dine out with friends and families, letting the inner pig take hold as finger tips and dessert plates are licked clean. The beautiful stench of barbecue based herbs; spices and various sauces fill the air, captivating the senses of the entering customers of the Blue Smoke Restaurant.

Located on 116 East 27th street between Park and Lexington Avenue, Blue Smoke is hard to miss, with its large sign that reads, “BARBECUE,” vertically. Opening in 2002, Executive Chef/Partner Kenny Callaghan and Managing/Partner Mark Maynard-Parisi made the establishment a major Barbecue scene in New York City.

Taking the first steps in, the mind is taken on a wild adventure of seduction as the BBQ aroma dances through the nostrils. Continue and those steps become long exuberant and slightly infantile while making way toward a table to be served. 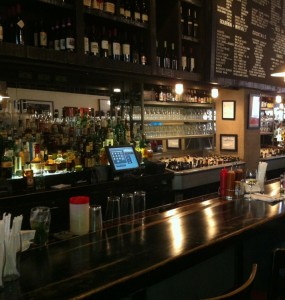 Near the entrance is a very large bar that holds some 42 different kinds of bourbon as well as wine and other alcoholic beverages. Booths and group tables fill the restaurant, but not to the point where there is cluster. The big red cushions on every seat or chair may come off loud and somewhat tacky, but sitting comfortably, allows some forgiveness.

Throughout the restaurant there is a wide display of various artworks, from mosaic-based pieces and metal crafted structures, to various photos that further animate the restaurant. Sitting in the back of Blue Smoke is where the full experiences can be grasped. Film-covered windows allow for a subtle amount of natural light to shine onto the tables rather than using bright light bulbs.

There is a very welcoming feeling as the host greets and the wait staff serves guest with heavy optimism in their facial expressions and conversations. “The waitress is so cheerful, it’s gross,” said a nearby customer after being served by one. While waiting, customers are entertained and their glasses are kept full. 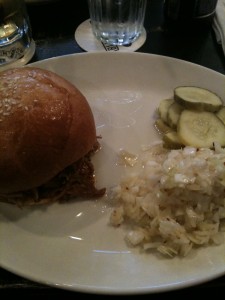 The prices are fair for the various selections on the menu, and while the main course section may be lacking in variety it makes up for in quality. The Pulled Pork Sandwich, on a homemade Brioche Bun with Pickles and Sesame Slaw ($11.50) is filled with a barbecue zest. Though greasy, warranting questions on hitting the gym after, just one-bite into the succulent and spicy sandwich allows one slacking day.

The Texas Salt & Pepper Beef Ribs half rack ($15.95), with a side of sweet potato wedges was an unfortunate disappointment. The ribs have a nicely seasoned essence; however it doesn’t improve that it’s rather dry, tough and gristly. Adding Chipotle BBQ sauce helped the texture, but the mostly bone and fatty dish nonetheless was far from impressive. The sweet wedges fared better, despite how tiring they can get after a while, maybe the sweet sugary taste.

The dessert however, is always a delight, from the first bite to the last. The apple crisp, which is a personal favorite, consists of glazed baked apples, crispy crust and topped with a 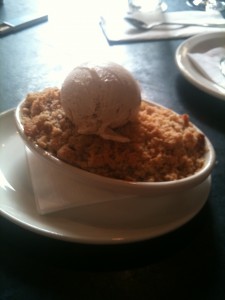 scoop of cinnamon ice cream. The first try immediately reminded me of one the many mouth watering cupcakes of the Crumbs franchise, but not as sweet. The delectable dessert is well worth the packed gut and paining moans after a good meal.

This entry was posted in Food, restaurant reviews and tagged Joseph Jackson. Bookmark the permalink.