Baluchi’s– Half Good, Half Bad at Half Price

Baruch students rarely find themselves on 3rd Avenue, unless they’re grabbing a drink at Fitzgerald’s, but next time you’re down to your last $10, you might want to consider skipping happy hour and heading across the street to Baluchi’s. The small Indian restaurant serves its entire menu at a 50% discount from 12pm to 3pm. 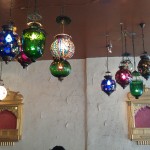 Unfortunately, if you’re looking for a classy Indian setting, Baluchi’s might not be the place for you. The half price discounts are well paired with the tacky ceiling lamps, which I imagine were bought at half price as well. If you try not to get distracted by the lamps, you can actually focus on the menu. With two categories for appetizers (Regular and Vegetarian) and five categories for entrees (Chicken, Lamb and Goat, Seafood, Vegetarian and Tandoori), there’s something for everyone. 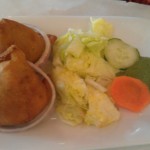 The Samosas sport halos to prove they're heavenly!

Personally, the Samosas ($6.95), were my favorite thing on the menu. The appetizer comes with two fried dumplings filled with peas, chick peas and potatoes. It was a perfect mixture of doughy and crunchy, but I’m also partial to anything that’s fried. 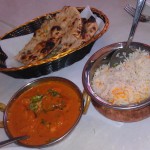 I wasn’t quite as taken by the entrées. I was split between one I liked and one I hated, but I’ll start with the good news first. The Chicken Tikka Masala ($15.95) was excellent served in a tomato and cream sauce. It wasn’t too spicy, but provided just enough kick to tantalize my taste buds. The sauce doubled as a dip for the Garlic Naan I ordered on the side, which is fluffy bread seasoned with garlic. The only thing that didn’t thrill me about the dish was its size. It was considerably small compared to the entrée sizes of other Indian restaurants I’ve been to. It also didn’t come with rice, which I assumed was a given, and I had to order rice separately. 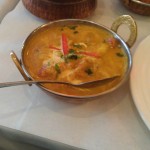 Now for the bad news. The Goan Shrimp Curry ($15.95) was a disappointment. The menu describes the dish as “cooked with sautéed onions, lime juice, spices and fresh coconut milk”. With all those exquisite ingredients, I was shocked that I couldn’t taste a single one. I’m sure there will eventually be a word to describe food that tastes like Styrofoam, but for now I’ll use the term bland. I found myself doing a lot less savoring and a lot more swallowing to get through the dish and on to dessert. 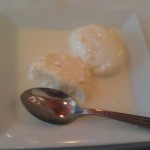 I wish I could say dessert saved the day, but alas, I was disappointed once more. The Rasmalai ($4.95) was another dish that looked great on the menu, but didn’t translate well from paper to plate. It consisted of two soft cheese patties, which were poached in a condensed milk sauce. The patties were completely flavorless and cold. In fact, the only thing I could taste was the condensed milk sauce, which was basically milk with sugar.

When the check came, I found that with the discount, I paid about $10 for a three course meal. For lunch, I’d say it was a good deal and I might go back for the Samosas and Chicken Tikka Masala, but I definitely wouldn’t go back for dinner and pay full price. $15.95 is way too pricey for entrées that tiny.

This entry was posted in restaurant reviews and tagged Baluchis. Bookmark the permalink.