Save Yourself the Money, Get Take-out and Eat Under a Blacklight

I consider Japanese food a safe bet. White rice, teriyaki meat, a couple of hand rolls and miso soup; what could really mess with that? I didn’t outwardly challenge the staff of Amber Gramercy to answer that question for me, but they gave it their best shot anyway. 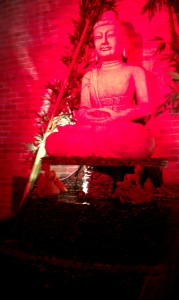 If you're not cool with large religious icons watching you eat, may not be the spot for you.

My group-mate David made a reservation with the seemingly chic and highly praised restaurant a week ahead of time, apparently not early enough to guarantee a table for our group of five anywhere but next to the drafty windows and conveniently behind the only entrance, where David and I would have to lean in and suck in our guts each time a new diner needed to walk through the door. Naturally, we requested a new table and were brought up to the dining room the website had promised us, a cramped but large loft illuminated only by some red spotlights on the brick walls and on the enormous Buddhist statue in the center of the back wall. 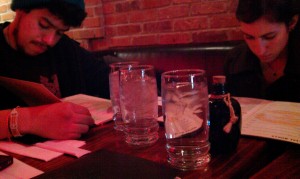 David and Teresa sharing my confusion over prices and gramatical errors.

I strained my eyes and my wallet looking through the menu and found a few dishes that wouldn’t leave me without bus fare for the ride home. I was too hungry by the time my chicken teriyaki with steamed vegetables and salmon avocado roll arrived to notice that my miso soup, traditionally served as an appetizer, never made its way to the table. It did hit me, however, after a few minutes of sloppy chopstick maneuvering of the rubbery chicken on my part. Over the not-so-soothing sounds of Kenny G that were blaring from the overhead speakers, I could hear one of my group-mates notify the waitress who had finally stopped avoiding us long enough to hear our complaint. 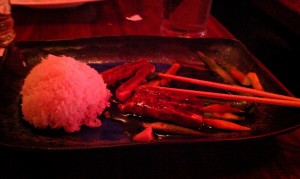 Yeah, I was also too hungry to wait to eat until after the photo.

“Oh, do you still want your soups and salads?” she asked, practically willing us to decline.

Really? Nah, that’s fine. You just keep that money, clearly our immediate questioning on the student discount made us seem like we had the extra cash to throw around for nothing. No, I didn’t say it, and I couldn’t really hear myself think it, either.

Just when our patience and time were beginning to run out, our miso soup dessert arrived. At least, I’m told it was miso. My tunnel vision in the dark dining room could easily have caused me not to notice the waitress scoop my bowl into the tiny koi pond and plop the lukewarm water on the table in front of me, but I’ll keep assuring myself that that wasn’t the case.

I offered up my credit card to cover the bill and took my group-mates’ shares in hopes of ending the experience before I realized anything else was missing from it. I gladly accepted the 10% student discount and darted for the door, the light, and some air that didn’t carry screeching clarinet tunes to my poor ears.

Oh yea, the vegetables were good.

2 Responses to Save Yourself the Money, Get Take-out and Eat Under a Blacklight