PeaceLove: A Small Cafe with a lot of Soul

It’s Friday night in the Melrose section of the Bronx and the smooth sounds of jazz music spill out onto the sidewalk at the corner of 151st St. and Melrose Ave.  No, it’s not 1920, this is what every Friday night sounds like at PeaceLove Cafe. 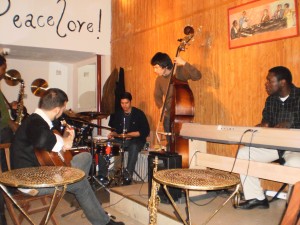 Few people would think that one of the poorest communities in the country would be the perfect location for an organic cafe, but Darada David isn’t one of them. Having grown up in the adjacent Mott Haven area, David walked along Melrose Avenue every Sunday to get to church and thought that something was missing.

” Seeing a lack of positive activities and cultural events… I wanted to create a place where people would feel good entering that also had great service,” David says. 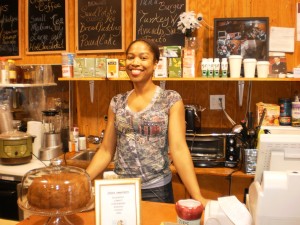 In August 2009, her dreams were realized when PeaceLove celebrated its grand opening.

The cafe, a cozy space with colorful mosaic tables and wooden chairs, features portraits of influential African American leaders, many of them musicians.  This is representative of David’s own musical background. Having gone to LaGuardia High School for music and receiving her Bachelor of Arts in Music from City College, David spent her time working on various art projects and singing in jazz clubs with the PeaceLove band, the inspiration for the name of the cafe.

The cafe’s menu features all organic fare, including items like fruit smoothies and okra chick pea soup. In line with the financial situations with most of the people in the area, nothing on the menu is more than $6.  David says that the cafe is her attempt at provoking change in a neighborhood and borough where healthy food options are limited.

A recent study found that the Bronx is the unhealthiest county in the entire state. Though the city has attempted to create programs to change this, including incentive-based programs such as the Healthy Bodegas Initiative which encourages bodega owners in low income neighborhoods to sell fresh produce and low fat products.  An increase in the amount of farmer’s markets in the Bronx has increased, but with many of them only open during the summer and fall, access to fresh produce for many of the borough’s residents is restricted.  However, David found that a lack of strong support from local politicians and city officials makes getting proper nutritional information to residents more difficult.

“It’s not that people don’t want to eat healthily, it’s the environment they’re in,” she says.

David hopes that her petition to city officials to put tax dollars towards incentives for business owners to open locations in the Bronx will be approved to help stimulate the area and create economic growth. 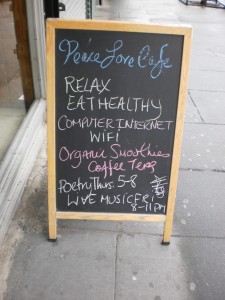 By participating in the Bronx Culture Trolley tours, hosting open mics and poetry jams on Thursdays, and featuring live jazz music on Fridays, David is creating a buzz for PeaceLove as a cultural hot spot or a place “where Bronx socialites go” as the cafe’s slogan proudly boasts. It hosts events for influential members of the community and borough, such as February’s Bronx Social Media Week which invited Bronx bloggers and television personalities to participate on an informational panel.

For it’s efforts and positive influence in the neighborhood, the cafe earned a Certificate of Merit from Bronx Borough President Ruben Diaz, Jr.

David says she would love to expand the cafe to other areas in the Bronx if resources and the opportunity to do so arose.

Alvin Rogers, a saxophonist who often plays at the cafe  during jazz nights, has been playing at PeaceLove since it opened. 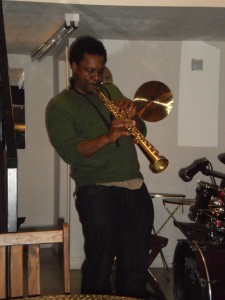 “It’s a treasure for the Bronx,” he says. “It plays a big role in the community… I wish it were embraced more.”

As editor for the Weissman Center, Lisa received her Bachelor of Arts in Journalism and Creative Writing from Baruch College in June 2011. She co-founded the school's sole creative writing club, Writers' Society in 2010. When not working on the blog, Lisa explores interest in local reporting. She has interned at Bronxnet, the New York Daily News, and the L Magazine.
View all posts by Lisa →
This entry was posted in Food and tagged Melrose, organic, PeaceLove Cafe, The Bronx. Bookmark the permalink.

6 Responses to PeaceLove: A Small Cafe with a lot of Soul