Enter any pizzeria and watch what everyone orders. As a countless number of round pies are devoured within a single day, watch as the square slices gather dust. 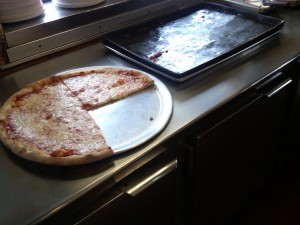 This past weekend the sky was draped in remorseless Grey.  Shades of red hover over one particular part of Brooklyn, NY. Many flock to obtain this strong color even if results in a Scarlett letter. The “Hester Prynn” of this scene are not scapegoats or sinners but they are pizza connoisseurs who happen to forget to take a napkin when they eat a Sicilian Slice.

Grey Skies do not have remorse. Neither does marinara sauce.  Not only does marinara sauce ruin everyone’s favorite shirt, it is the staples of a Brooklyn establishment that tries to brighten the day of many residents in Bensonhurst and 86th street. L&B Spumoni Gardens is this establishment as it stabs local’s taste buds with their signature Sicilian Slice. 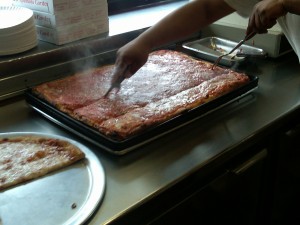 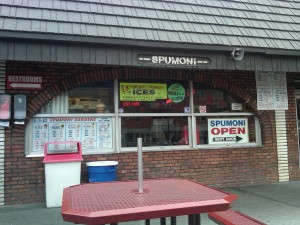 Pizza lovers choose L&B Spumoni Gardens to take a bite of Sicilian nostalgia and heritage. Nick, 49, has been going to the garden of marinara for nearly four decades! Although he wouldn’t give out his last name, he went into detail on his love for Spumonis. “My parents took me to Spumonis. My grandparents took me to Spumonis. I take my kids and nephews to Spumonis,” says Nick. “I plan to take my grandkids until my gut won’t let me, he laughs.” Nick is not the only one who enjoys L&B Spumoni Gardens and he won’t be the first. 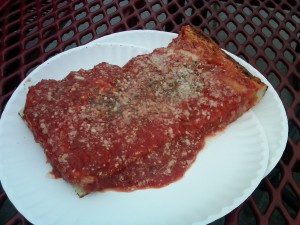 Known for their famous Sicilian slices, Italian ices, and outdoor seating, L&B Spumoni Gardens has been in business for over seventy years. Only closed on Easter, Thanksgiving, Christmas Day, and New Years Day, Spumoni Gardens hosts lines of hungry customers who want a piece of Ludovico Barbarti’s dream.

Originally from Torella Di Lombardi, Italy, Ludovico Barbarti began his pizza career with a simple wagon. With his prized horse, Babe, Barbarti rode along Gravesend and Bensonhurst, Brooklyn, selling his products. By 1939, he decided to buy a vacate piece of land on 86th street. With the help of friends and family, Barbarti was able to build a second building in the same piece of land in the mid 1950’s. With the pizzeria established, they built a third building, which became the dinning room. L & B Spumoni Gardens is now in its fourth generation. “Grandfather Ludovico” has fed a lot of families in the Italian enclave of Bensonhurst, Brooklyn. There must be something in the sauce

“There’s too much sauce and the regular slice sucks. I don’t see what’s so special about the pizza. I have been to this place a couple of times and I don’t see why it gets so much attention,” says Vlad, a college student, who just like Nick wants to remain mysterious. Its a common theme in this experience. In four days, I was only able to get five interviews. Within those five interviews all I could get were a couple of cheesy quotes. Ironically both the manager and the owner were not available for those four days. While I could not get an interview, it was evident that their business will never slow down. Within a thirty minute span, I saw ten to twenty customers. They all came from different directions. For more than seventy years, L&B Spumoni Gardens has lived through several wars and two different recessions. Often imitated but never duplicated, Spumoni Garden’s business will always be admired for their name and reputation. Unfortunately for me I even got denied by a group of teenage girls (not as creepy as it sounds). Outside of that sad fact, the pizza passed the eye test and the interview with my taste buds.

This entry was posted in Food. Bookmark the permalink.