How did the colonialists win the Revolutionary War? With a massive army that could topple empires, the British still lost to the revolutionaries. Some people believe that England was losing too much money and were outmatched in enemy territory. Instead of honing their skills with guns and naval artillery, I believe they honed their skills with clarinets and pianos. I can proof it too. While it is not in any of our history books (insert a World War II fact), I could prove it by showing you anyone’s playlist.

Before I get carpet tunnel by pressing enter again, I have to admit that I was taken back by the amount of music that is exported from Britain. It still hurts me that people who made “Stairway to Heaven” were not hippies from California. 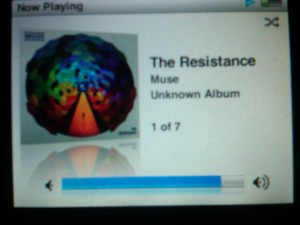 Dominic Brown, the drummer for Muse once said in an interview with ilikemusic.com that he likes music because “it makes [him] feel the most free [he has] ever felt in [his] entire life and gives [him] the freedom to do anything without much consequence.”  What makes them stand out is how free their music. Supposedly the United States is the home of freedom, but yet music is limited by Record Companies. Unique and different does not sell. Once an artist starts to break out they have to water down their product to accommodate the norm.

One of those accommodations is the role of women in Rock music. Once a female artist begins to become a brand, she is quickly adjusted to Country or Pop Music.  Jennifer Nettles from Sugarland and Haley Williams from Paramore are exemplars of this transition. Rock Music should not be a male dominated avenue, but the facts still remain that these women have made more money on dropping the bass and drums kit for more album sales. The XX and Band of Skulls are two unique British bands that are beginning to gain notoriety with their uniqueness and their lead singers.  Both bands have both a female and a male lead singer. The XX consists of vocalist Romy Madley Croft and Oliver Sim [bass]Baria Qureshi [guitar] and Jamie Smith [beats/production]. Band of Skulls consists of Russell Marsden [guitar/vocals], Emma Richardson [bass/vocals], and Matt Hayward [drums]

Honestly both female leads sound identical but it is evident that both bands have a different voice. I rather hear this on the radio then most of the “music” on the radio.

[kml_flashembed movie="http://www.youtube.com/v/fKL2prSqDQI" width="425" height="350" wmode="transparent" /]
Copyright Disclaimer Under Section 107 of the Copyright Act 1976, allowance is made for “fair use” for purposes such as criticism, comment, news reporting, teaching, scholarship, and research. Fair use is a use permitted by copyright statute that might otherwise be infringing. Non-profit, educational or personal use tips the balance in favor of fair use.