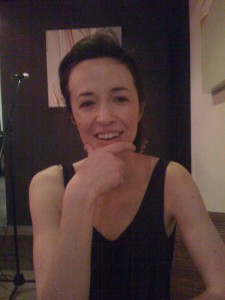 There she was- with her black hair in a ponytail wearing a black shirt covered by a white sweater and blackish-gray denim jeans. Her wardrobe was accessorized by her brown six-string guitar.

As folk singer/songwriter Brooke Campbell readied herself for her performance at the 92nd Street Y Tribeca she walked on and off the black mini stage, which should rightly be described as a small square in the corner where naughty children would be placed for time-outs, placing candles on a table to add to the ambiance and illuminate the small stage.

Campbell is originally from North Carolina and although her primary residence now is Nashville Tennessee she is residing in New York until this summer.

Campbell, although she would sing songs such as harmonies, Christmas songs and songs from the fifties with her mom in the car growing up, did not really commit to becoming a musician until she attended college. As for picking up a guitar she did not do so until she was 21. Campbell, in an interview for the website thehighcalling.org, said that she began taking her talent seriously the same time she began to for a relationship with God.

When it comes to writing and sharing her music she feels, as she told the website, that it is “a great responsibility to tell the truth before God.”

As she walked on the stage again to do her mic-check, and fiddle with her strings to make sure they were properly tuned, just a couple of inches from her stood a  four foot stool, the color of dirty grey, which had a coffee and a glass of wine placed on top of it. As she finished preparing she would take sips of each one.

The couple of people who were there prior to her showcase where busy talking either on their phones or to each other to notice that the singer/songwriter was there.

As she began her set at 8:15 PM, 15 minutes prior to starting time, she announced to the small group and those who were still getting themselves seated, with a smile on her face, who she was and that she would play for them for a while. 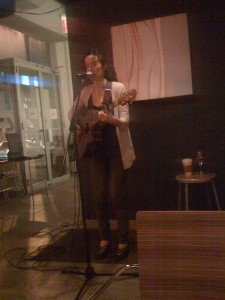 As soon as she began to sing it felt as if you were transported into the early to mid 90’s. Closing your eyes you would’ve believed that it was singer/ songwriter Jewel up there; both having a soft melodic folksy sound to their voice. The kind of sound that is appropriate for a coffee house style venue. The sort of music that when song the amount of people in the crowd becomes irrelevant because no matter who you happen to be that song, no matter how long it is, is about you and is being song for you. The type of music that causes you to connect with a complete stranger.

The title track from her album Sugar Spoon is a 3 minute 5 second version of ‘Alice in Wonderland’. In the upbeat folk track Campbell sings about locking herself “inside the house and melting down the key turned it to a sugar spoon to talk to my coffee.” Later in her lyrics she mentions climbing into a bottle and going down a rabbit hole.

A connection to Jewel can also be made there. In her 1995 album ‘Pieces of You’ in her song ‘You Were Meant for Me’ Jewel sings about breaking the yolks to make a smiley face and consoling a cup of coffee that didn’t want to talk. The huge difference in both tracks in both tracks was the topic; whereas Campbell’s song was upbeat Jewel’s concentrated on a breakup.

Unlike the album’s title track where Campbell’s lyrics suggest that she welcomes the confusion, ‘Why?’ is a song that speaks about the confusion brought on when it comes to love and her emotions surrounding it.:“I slam doors close and even I don’t know why love scares me so.”

Listening carefully it becomes apparent that Campbell makes a transition from feeling love in her relationship to feeling ignored.  Some of the most poignant of the lyrics were: “I am full of bullet holes through my back and through my soul as I bring you your beer/ You don’t even know my name you look pass me to the game.”

As she kept playing her songs, every once and a while stopping to adjust her guitar to the tune appropriate to the next track or remove her sweater, she would tap her foot to keep along with the beat. She was wearing black shoes that seemed to have a weaved overlapping zigzag design to them. 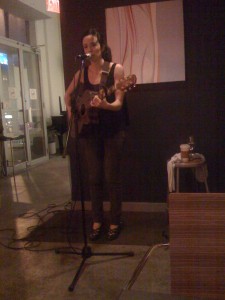 Every once and a while the people would clap and she would respond with a “thank you” and a smile to the small gathering. Over the course of the performance there were people still coming in to sit down, and even though it was not a pack house she appreciated those who were there.

Kari Pulizzano, who did not attend the showcase but did listen to Campbell’s tracks feels that although she has “the upmost respect for self-made musicians” in her view Campbell was “an average chick with an acoustic guitar, singing little bits of her life to strangers in a small bar with a brick backdrop.”

Pulizzano did say that Campbell “appears to have a great passion for what she’s doing” and that she would not mind hearing her on a weeknight out having drinks and dinner, but that Campbell’s voice seemed “strained and nasally” and that her guitar playing was average and that she, Pulizzano, wouldn’t go out of her way to catch the singer/ songwriter’s set.

She also preformed covers in her set. One of them was for her brother who, she informed the crowd, had just returned from a tour in the army.  The song had no title but she explained that it was found in a church a long time ago and was written about soldiers who died in war.

When she finished her set she walked up to the people sitting in the front tables (those who seemed to be really paying attention to her) and said “thank you for coming” and smiled.

Brooke Campbell’s album ‘Sugar Spoon’ can be found on iTunes.