Petite Abeille is worth another date

Posted on April 27, 2011 by alexandra.torres
I was fully prepared to stuff my face that late Sunday morning, and as I headed to the Belgium restaurant Petite Abeille, the anticipation mixed with hunger pains made me wish for the conductor of the Brooklyn-bound L train to go express.“This place better be good,” I thought to myself. After getting off the train and walking a few too many blocks because I got lost, I was there before I knew it.

“Yeah, its the place with the blue awning; next to the Mexican place,” said my classmate Jerrica over the phone. There, on 401, East 20th Street, plainly stood Petite Abeille, an establishment much like the seemingly perfect guy, who is handsome with a great personality and a good job. You’re almost certain he is the one until you discover “the flaw”, whether it be that he’s too much of a momma’s boy or has bad credit.

The restaurant’s name translates into “Little Bee” and is also the name of a Belgium children’s book that was popular in the 1970s.

The chalk boards and the shelf of children books toward the back suddenly made sense upon finding out this information. Clearly a family place, the atmosphere created a warm feeling like cherry pie, which I couldn’t help but think about considering the picnic-like blue and while plastic table cloths that invoke images of the fourth of July and all things American.

Red was subtlety consistent throughout from the painting of a red dragon that greets customers, to the candle holders, to the red wood chairs at each table and by the bar, to the Bloody Mary’s I coveted as they were sipped by a group of friends.

The serene yellow walls with white trim conjured up a mental portrait of a field of daisies on lightly windy spring day. The color scheme, along with the round modern light fixtures hanging from the ceiling, got lost in busy chatter during brunch

The atmosphere was as mildly exotic as the fusion of flavors of the Crocottte ($13), found in the breakfast, brunch and lunch menus in the eggs category. It is sure to break the monotony of the typical breakfast that consists of fried eggs, toast and bacon. 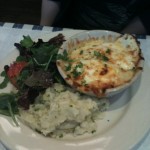 A delightful layered combination of eggs, tomato, pork bacon, and salty yet bitter goat cheese, it was concealed beneath pungent Gruyere cheese, in the same manner it would overlay a French onion soup. The crisp edges rendered a delightful treat circling the center’s chewy consistency.

Compared to the milky-tasting mashed potatoes, which resembled a round scoop of icecream and had an occasional lump that added character, it was a guilty pleasure, however, the spinach leaves, lightly covered in oil and vinegar, fooled me into thinking I was being nutritious.

I let it ease my conscious as I washed it all down with a Mimosa ($7), which was on the strong side. Considering the delightfully bitter taste, it was certainly not your Tropicana or Nature’s Best orange juice.

On the other spectrum of great food was the Vol au Vent ($17), the chicken stew with 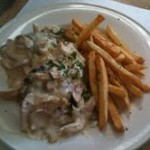 bacon and mushroom, which could be found on the brunch, lunch and dinner menus. Covered in an off-white gravy, mushrooms and pearl onions, and missing the bacon that it advertised, the only thing this bland chicken had to offer was tenderness. The two burnt croissant-like breads underneath it all just added to the frustration.

At least I had my side order of Belgium fries to drown in ketchup and enjoy. Not! The fries lacked the anticipated crisp exterior and soft steamy interior that would have easily been achieved by most fast food restaurants.

But just like the low credit score-having momma’s boy, sometimes the redeeming qualities can stand on their own if they’re just that good. Only by being open-minded and going on another date can you learn more about what Petite Abeille has to offer.