The Only Good Thing About Amber Is Just The Name

For many years, I had always told my friends how much I hated to experiment with new 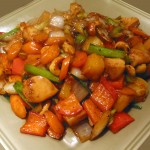 foods. When I would get hungry, I liked to eat foods I knew and I enjoyed. It really bothered me when I would buy food I had never eaten before and I ended up hating it. As i grew older, such ideas started to disappear and I decided to give different foods a chance. To my surprise, I started discovering new delicious and very tsaty foods. Now, it’s one of my various hobbies.

It goes without saying, there are times where i really don’t like the food or the service for that matter. Amber Sushi Bar, located on 27th street and 3rd. Avenue, would be a great example of what terrible service looks like.

When I first entered, the first thing I noticed was the bar on the first floor. It took almost half the space of the first floor. Nevertheless, it looked tempting and inviting. The decorations give the restaurant a cultural and traditional, yet modern look and feel. Upstairs, things take a complete turn down.

The space is more limitted in the second floor, forcing the management of the restaurant to decide on a horrific seating arragement. The tables are arranged by rows, one after the other, with only few inches of space beatween each table. When I was directed to my table, where my friends had been waiting for me, as I was sitting down, my backside ended up in the face of an unfortunate customer sitting in the table next to ours. It was, I have to admit, an embarrasing moment.

I waited 15 minutes before I finally got a menu from the waitress and another 15 minutes for her to come back to take my order. We were given a choice between soup and salad. I opted for the salad. I got my main dish before the salad, and I had to let the waitress know she had forgotten to bring, not only my salad but my friends’ as well.

As far as the food goes, what can I tell you? It was average. It was not extremely good, and it did not make me feel like it was the best food I had ever eaten. But it was not too horrific either. I had a Pineapple Chicken dish that tasted very similar to the ones I have tried at some other restaurants. It was missing something. I wanted the dish to have something different to make such a typical  dish a unique one, but unfortunately, it wasn’t there. I can only say this: I would not go back to Amber as long as it is my choice.