If listening to soulful music is like treating yourself to a scrumptious piece of red velvet cake on the cheat day of your diet, than Brooke Campbell’s CD Sugar Spoon is the icing on top of it. 01 Sugar Spoon

Campbell is a singer-songwriter virtuoso of folk, pop and bluegrass music. She constructs music that will cause one to long for a simpler country life, reminisce about old loves and new, and think about life’s labors. Singing it all with a country-ish twang and being a mellower version of the Dixie Chicks, Campbell’s music easily matches her upbringing in Whiteville, North Carolina.

According to her website, she loves to “write music and sing it for folks.” This is the case despite the size of the crowd, which was clearly evident considering the small crowd of listeners she serenaded in the 92Y Tribeca. According to their website, 92YTribeca Nightlife […] offers outstanding live experiences for audiences, performers and participants alike.”

At 8:30 p.m. on Thursday, April 14, my classmates Jerrica, Sabrina, Ashley, Gladys consisted of about half the audience until there was an uptick of attendance as curious onlookers trickled in.

Enjoying the dim atmosphere of a rather boring venue, I let the extremely sad songs, most of which were about Campbell’s life, sink in. It was enough to bring any love sick fool, like myself, to tears. The glass of red wine did not help much either, especially as the music to one of her songs truly sounded like rain drops landing on a lake.

Still, a fan of guitar and folk music myself, much of Cambell’s music lacked the emotion I expected from this genre. Singing almost at a whisper, her vocals didn’t have the excitement I desired and expected when I walked in to find a woman with a guitar. 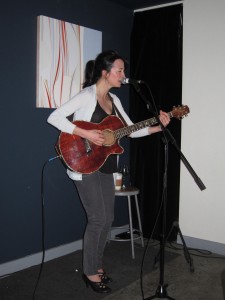 Occasional faster strums occasionally did break the monotony of the relatively slow strums that would put anyone to sleep with its soothing rhythms that came from Campbell’s red wood acoustic guitar.

Cambell’s breathless voice then added to it lightly. Her voice was as subtle as her body movements; she tapped her foot slightly and moved from side to side, bopped slightly to her beat, and appeared like the picturesque starving artist playing the blues.

Track after track was played from her latest album Sugar Spoon, which came out in 2009. According to her website, the album was produced by William Berlind in Manhattan and a church in Nantucket.

Good music nonetheless, I left the venue with a relatively melancholy mood to start off my spring break. However if your life is virtually void of hardships, listening to her songs is sure to be an effective remedy to decompress after a stressful day.