A Great Big Pile of Nothing

I should’ve expected the worst when a fellow reviewer and I got lost on our way to the venue — an ugly-looking, white-washed building perched between austere apartment buildings and factories perhaps not in use since the child labor laws have been lifted sometime in the early 1900’s. It also didn’t help that it was right next door (and I mean that literally, right next door) to a Western Beef — a supermarket I associate with neighborhoods that are more notorious for their crime rate rather than good choice in music and cuisine. Perhaps I expected too much from Highline Ballroom — hey, maybe the “ballroom” part got to me — but from the outside, the music venue is anything but top of the line.

After a two-flight walk up on rickety stairs wide enough to only accommodate one person at a time, we were met by two Australians — a man and a woman, both dressed in black to match the walls — that appeared to work here. The man scanned our tickets, and the woman politely offered us a table — which, to our horror, came with a $10 per person price tag. Having come from a full day of class and work, we inquired about some sort of coat check. At first, they appeared puzzled, but then informed us that we’re on our own. Strike one against Highline.

The area itself was large and fairly spacious, with two bars on parallel walls and a dining area adjacent to both. The room was well air-conditioned and quite airy — definitely important when packed with hundreds of sweaty, gyrating people. However, packed it was not. Frankly, until the first act, it appeared that there were no more than perhaps 30 or 40 people total on the floor. 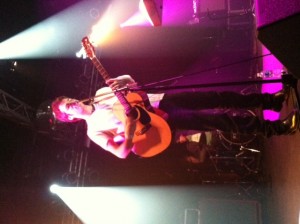 The first act practically reeked of bubblegum pop and Hollister anthem — a Jonas brothers-y type of band called Two Lights in which the lead singer was cute, the songs were all about summer and breaking up, and the crowd was as enthused as one would be for a root canal.

However, that all changed once A Great Big Pile of Leaves got on stage and began setting up. A mob of tortoise-shell-wearing hipsters rushed forward, pushing to the foot of the stage. Cheers erupted from the pluck of the first guitar string.

They reeked of cliche and unprofessionalism — no introduction to the members (although I was led to assume that one of them was Tyler, due to the yelling from one of the members in the audience), no sound check, no building of a relationship with the members of the audience that weren’t already fans. The songs themselves weren’t catchy in any way, and the melodies were virtually indistinguishable from one another. It was the same breakup, lazy-day crap that Two Lights pulled — just in a scruffier outfit, though I could appreciate the occasional swear or two. 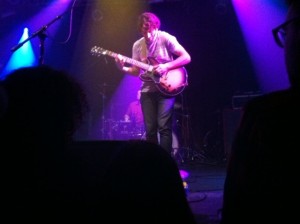 All in all, it was ultimately very forgettable — from the lack of interest to connect to the audience, to the half-assed songs that frankly seemed like a ten year old wrote them (“no time to sleep, no time to eat, trying to make money!” Really?!), a Great Big Pile of Leaves is an act that deserves as little recognition as the effort that they give.

2 Responses to A Great Big Pile of Nothing