During the 19th century the citizenship rights granted by the Fourteenth and Fifteenth Amendments did not apply to Native Americans. Some laws did however offer them citizenship if they left their tribe and “joined” American society, but the  American Indians valued their cultures and a lot wanted to maintain it, therefore many were not American citizens. It was not until 1924 that congress made all Indian Americans citizens. 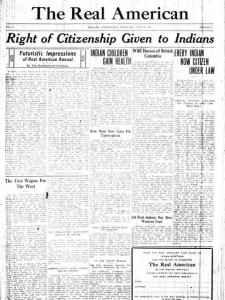 The Real American was a weekly paper by published by Hugh Howell. It was published between 1922 and 1924 in Hoquiam, Washington. This paper was of great resource, support, and information for the Indian community. The paper covered all sorts of topics from local cultural events to the struggles of Native Americans.

One Response to LEAVE YOUR TRIBE (REJECT YOUR CULTURE) AND BECOME A CITIZEN!