Railroads was a mean of transportation that connected almost all the businesses together. The first transcontinental Railroad was built to connect the West coast and the East coast. In 1862 Abraham Lincoln and the senate finally approved it and established the Central Pacific to started building from the west and the Union Pacific to start building from the east. The building of the railroad would take years. So they established a reward for who built the fastest. This was called the race to Utah. The first company to build their way to Utah would receive a reward.  The railroad transported goods from one side to the other. In 1883 they realized the different in time from the West coast and the East coast made it hard to keep track of time. So the Railroad company divided America into four time zones which is still in use today.

The number of railroad tracks tripled between 1860 to 1880 and tripled again by 1920. A lot of people relied on the Railroad to operate their business. In other words, if the railroad company was in financial crises, almost the entire economy suffers because there is no other way to transport their goods to the other side of America. 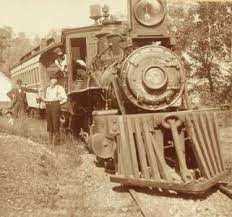 This entry was posted in KM24, September 21 Assignment and tagged industrialization. Bookmark the permalink.