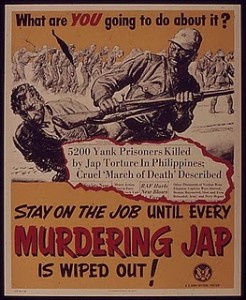 This Anti-Japan War poster aims to encourage Americans to continue working hard on the homeland.  The war is often referred to as the good war after the Japanese bombed pearl harbor.  This was now considered a fight of good vs. evil even though it was the bloodiest war in human history with an estimated 35-60 million deaths.  This was also a war that was extremely beneficial to the US economy.  On top of that it helped the US establish its stake as a world power.

One Response to Good vs. Evil